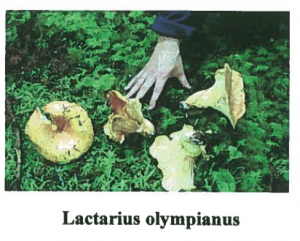 Introduction : By Pam Janszen This research project began in August of 1997 when I was granted permission to do fungal inventory and research work in Winter Cove Provincial Park and Ecological Reserve # 15, both on Saturna Island. Since that time I have made 87 trips into the Reserve and 61 trips to the Park. This year accounted for 22 of those trips to the Reserve and 16 to the Park.
On most of these trips my husband, Harvey Janszen, a botanist who also does terrestrial ecosystem classification work, accompanied me. He is responsible for the work that has sectioned the Reserve into the terrestrial ecosystem polygons I use in my collecting data. He is also my photographer and is responsible for the many pictures in this report. This past year I have also the pleasure of being accompanied by Mr. James (Jim) Ginns while hosting him on two collecting trips to Saturna Island. Jim Ginns is a well know expert who specializes in the Corticioid fungi, loosely described as being wood rotting fungi that have no stem, pores or gills.

See PDF file: janszen_2001_annual_fungi_report
This report inventories those species found from February 1, 2000 to February 28, 2001. Annotated records for the previous years may be found in the annual reports of November 1997, February 1999 and February 2000. The appendices of this report contain separate lists o f all species collected in the Reserve and in the Park since the inception of this project.
In addition to the inventory work, I also record the occurrence of each species of fungi encountered. Using a checklist of previously collected fungi, I note each known species encountered on a trip. Sample checklists for the Park and the Reserve are included in the appendices. Based on information from these checklists, this report contains updated data regarding the abundance and season of hose fungi collected thus far.
I have increased the amount of territory  I study each year. This year I have extended Trails 1 and 3 in the Reserve. Maps ofthe areas studied are located in the appendices.
Most of my increased effort this year involved more complicated data collection;    I have extended the checklist data from species seen on a trail in the Ecological Reserve to include those seen in the polygons on that trail. While it is to early yet to make use of this data, it will be very valuable later when it is cross-referenced with each polygon’s specifics, i.e. soil type and vegetation.
General Observations
Because this research is my “hobby” rather than my job, the time I can devote to it is limited by my less interesting, but more financially rewarding work. This tends to skew my results somewhat. I do not have enough time to visit all the areas as often or as regularly as I would like and I may miss a fungus such as the Entoloma bloxamii that I have only found twice on Saturna. The first year I found it on October and this year I found it in the exact spot, but on September 4th.
The time I have to spend identifying, drying, recording and storing the specimens from the field trips is similarly limited. The reader who is familiar with fungi will notice a surprising lack of Cortinarius species in Winter Cove Park. There are in fact, many “Corts” in the park, but I have yet to tackle their identification. There are also many more Corts in the Reserve than I have identified. These and many species of Mycena, Inocybe and Russula have been passed over and await a time when those species which interest me more or that more readily lend themselves to identification are not equally plentiful. As defined, this project is a long-term effort and eventually time will minimize these anomalies, but in the meantime I ask the reader to be mindful ofthese facts.