Closed to the public by Order-in-Council no. 1920, 16 June 1977 to protect nesting birds which are very vulnerable to disturbance. A permit is required to land on the rocks and they are accessible by boat.

The terrestrial part of the reserve consists of two low bedrock islands 500 m apart, the southern of which is made up of three closely associated rocks. The bulk of the reserve consists of the subtidal area between the rocks and the 20 fathom (36.5 m) depth. Intertidal and subtidal substrates are largely bedrock, although small areas of mud, sand, or shell occur at depth. Surf action is moderated due to distance from the outer coast.

See the complete PDF from BC Parks: baeria_rocks

Despite the predominantly bedrock substrates, a variety of intertidal habitats are present, including rock faces exposed to the surf, crevices, tide pools, and a protected lagoon in the north island. The intertidal shoreline is almost completely covered with marine invertebrates and algae, the most common of which are barnacles, goose barnacles, mussels, sea anemones, starfish and seaweeds of the genera Endocladia, Fucus, Ulva, Egregia and Alaria. Interesting examples of intertidal zonation are present. The surrounding

subtidal area supports a diverse invertebrate fauna that is particularly abundant in hydroids, ascidians, and anemones (particularly Tealia lofotensis), and several species of algae. Common fishes are the black, yellowtail, copper, quillback, and China rockfishes, and the kelp greenling. 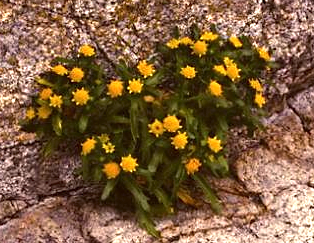