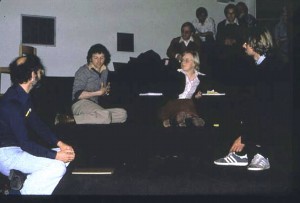 Abstract: Race Rocks Ecological Reserve Proposal –
Lester B. Pearson College
On April 21, 1979, a proposal for an Ecological Reserve at Race Rocks was presented to the Ecological Reserves Branch of the Ministry of the Environment by the students of the diving service and the marine science class at Lester B. Pearson College. The proposal recommended that the reserve should be comprised of the islands and the surrounding subtidal area to a depth of 25 fathoms. The central island, Great Race Rock, could be excluded because of the Coast Guard facilities there, but it was recommended that a request should be made to the Coast Guard to consider its inclusion as well.
–
The proposal outlined the use that has been made of the area in the past, and the present use being made of the area by Pearson College. It was pointed out that the proposal is quite consistent with the purposes of reserves, as stated in the Ecological Reserves Act of British Columbia.

It was emphasized that the uniqueness of the area for its subtidal life and the ever-increasing pressures on the area from divers made the need for protection most urgent.

Included in the report were the results of several investigations on physical and biological conditions carried out by the students. Throughout the report, examples were referred to of how Pearson College might continue to contribute to the reserve in terms of making information available to help in the educational task in reserve maintenance. It was felt that the role of “steward” for the college could be appropriate.
Lester B. Pearson College of the Pacific
R.R. 1, Victoria, British Columbia, Canada V8X 3W9 Telephone (250) 391-2441

–Workshop on The Race Rocks Ecological Reserve Proposal Saturday, April 21.7 1979, 10:30 a.m. at Lester B. Pearson College of the Pacific

The objective of the workshop is to present and discuss a proposal from the students in the diving service and marine science classes that recommends the establishment of the Race Rocks area as an Ecological Reserve.

PART A. INTRODUCTION TO THE PROPOSAL FOR AN ECOLOGICAL RESERVE AT RACE ROCKS.

To be included in the reserve would be the islands and the surrounding subtidal area to a depth of 25 fathoms. It is appreciated that an exemption may be allowed for the land above the high tide level on the main island , Great Race Rock, as this is presently used as a light station by the Canadian Coast Guard.

This proposal outlines the use that has been made of the area by the college for educational purposes, and the plans for the future educational projects that can be carried out in the area.

The proposal is consistent with several of the purposes as stated in the Ecological Reserves Act.
“…. to reserve Crown land for ecological purposes, including:

Part C of this report outlines the use made of Race Rocks by Pearson College marine science and diving students in the past few years. In addition, Part F outlines some of the potential of the area for future ecological studies that are observational in character.

The uniqueness of this area has been documented by Dr. Paul Breen of the Pacific Biological Station in Nanaimo (see appendix 1) and by James M. Goddard in a report to the National Parks Branch in 1975:

“The unique feature at Race Rocks is the subtidal flora and fauna inhabiting the high current velocity channels.” (2)
3 The interest shown by diving photographers recently is also well known. (3) Recently, the National Geographic Society has been in the process of preparing’a feature article on underwater life at Race Rocks; this also attests to the uniqueness of the area. page2 As far as being a representative example of natural ecosystems within the province, the area also has merit. It is moreover one of the high current ecosystem areas that has proximity to a population centre and therefore receives more pressure from the public. –

It is to be hoped that the acceptance of this proposal will enable the preservation of this area for educational and research purposes, as well as for controlled recreational use by the public.

In recent communication with the Coast Guard, evidence has been obtained that could suggest that they would be willing to accept the Ecological Reserve being extended to include the main island, Great Race Rock.

We would highly encourage this, as it would be a more appropriate recognition of the close ecological links of the bird colonies on that island and the rich life in the surrounding area.