Great news – the Ecological Reserve Islands are still there, having withstood the

November floods! Those floods resulted from the ‘Atmospheric River’ downpours

that lasted several days and flooded the old lake bed at nearby Sumas Prairie, as

well as parts of Merritt, the Nicola River, Coquihalla and Skagit. However, the

show that it was not as high as the annual Fraser River freshet. The 2021

November flood peak measured 6.9 metres at the Hope gauge, while the June 2021

annual freshet peak was higher at 8.8 metres. But lower down on the Fraser, at

Mission, the gauge reading was relatively high during the November flooding, at a

similar level to the June freshet. This makes sense as the Mission gauge is located

and Sumas Rivers. The Fraser River ER#76 islands are located above where the

Chilliwack/Vedder/Sumas Rivers flow into the Fraser.

been washed out and caved into the river bed out of sight. For a short distance the

underlying membrane tarp remains on the slope, but the riprap rocks that had been

placed on it are gone.

islands and as well there is a gravel bar forming a short distance offshore, visible at

today’s lower water level. Hopefully in the years to come this gravel bar might help

protect this shoreline from erosion. The islands look to have benefited from the

upriver November flood erosion, that is, the north and northwestern accreting sides

of the islands have had their height increased considerably with deposits of sand,

silt and clays. The volume of deposited sediments is enormous. A very rough

estimate is in the order of 15,000 gravel truck loads! (This crude estimate is based

yards x .5 yard deep). Sand, silt, and clay have been deposited based on location

relative to the river flow and whether in back-eddies, main channels or slower-flow

channels, as well as location as the flood levels resided. The height increase of

vegetated islands of horsetail, willow and cottonwood. Now with the new sediment

deposits, the river bed is almost the same level as the vegetated islands. In

addition, where colonizing vegetation of cottonwoods or willows, had been

vegetating the river bed, these young trees now have sand deposits rising up their

sand. Another visible feature of the filling/depositing of flood sediments is that two

of the major inner channels that formerly had gravels and small pools, interspersed

with bunch grasses growing in the gravels, are now filled with deposits of silts and

clays, again reducing the channel bank height up to almost the level of their

horsetails, shrubs and trees. These sediments would have settled out from the fast

Reserve islands are located. That is, the gradient of the river flow gradually slows

downriver from Hope, and especially at the ER islands, as here the Fraser can

expand to its widest width, about 1.5 kilometres across from mainland dykes on its

You may well ask, why are these un-dyked islands important ecologically? From the

perspective of geomorphology, they help slow the force of the flooding Fraser. From

of both food and habitat. Recent studies by Mike Pearson et al (2021 Freshet

Sampling as reported to the February 2022 Heart of the Fraser Strategy Session),

documented the value of un-dyked Fraser River shorelines to fish, when their

vegetation floods during the May-June freshet. When the vegetated shores flood,

many insects become available for food for fish. Many small fish (fry and smolts)

need the quieter waters of back channels, eddies and flooded swales to successfully

increase in size. Main stream sturgeon spawn during the months of Fraser freshet,

benefitting from the high value food availability at that time. The estimated 30

time in the main stem of the Fraser from March through June, and need the quieter

waters of inner channels and flooded cottonwood forests. There are few undyked

service for fish. Most of the river shoreline of the Fraser has been ‘hardened’ with

Pink Salmon that spawned last September on the gravel bars of the ER. Many of

their spawning redds have been covered by deposited sediments. Their eggs would

have been hatching around this time (March), and will likely not be successful with

the deep covering of silt-sand-clay. There are however a few gravel areas

remaining closer to faster flowing channels, so there may be a few successful areas

with Pink salmon eggs hatching. During normal Fraser river flows between their

September spawning and March hatching, there would not have been such

extensive flooding, shifting of river channels and deposits of sand, silt and clay.

When walking about the islands and their channels at this low water level, we

noticed a much larger quantity of driftwood debris than usually seen. The debris

Several conifer branches were seen, which is not typical as from previous years the

small amounts of driftwood debris would be from deciduous cottonwood trees. The

on the shore by receding waters, looking very battered with broken trunk and large

showing its long three-clump needles. We wondered whether the beavers were

attracted to this pine, as a gift from a far-away territory (perhaps Nicola River?)

and the beavers purposefully used it to decorate their entranceway?

to the southern larger river channel, similar to the change we observed last year.

throughout the day, but none landed, no longer possible in most areas given that

the formerly hardened gravel bars are now coated with shifting sands, silts and

clays as well as debris.

The Osoberry shrubs (Oemieria cerasiformis) were flowering and the Snowberry

(Symphoricarpos albus) was leafing out. The eagle’s nest in the large cottonwood

did not look like it had been expanded, but in the late afternoon we saw two adult

eagles perched in the nest tree, on branches just below the nest. The lower eagle

was plucking feathers from what looked like a duck, as seen through our spotting

scope. Overall for birds we observed fewer species, but this has been the case for

other birding outings in the Lower Mainland over this past winter.

motor boat with a group of people, so we didn’t observe birds in that area. Another

couple, we learned they were walking about the gravel bars looking for agates.

Island, to reach shoreline gravel bars, also to search for agates, so this has become

Extensive deer tracks and one area with small bones found

Spider (many were running quickly in sandy areas, then would abruptly stop)

Birds have been entered on eBird at hotspot as follows:

northern accreting island; 500 flying over from Chilliwack area towards Stave

farmers’ fields, but these not included in count)

accreting islands; 50 fly over in one flock

o Mallard 20 flying over in one flock

small groups from 2 to 5 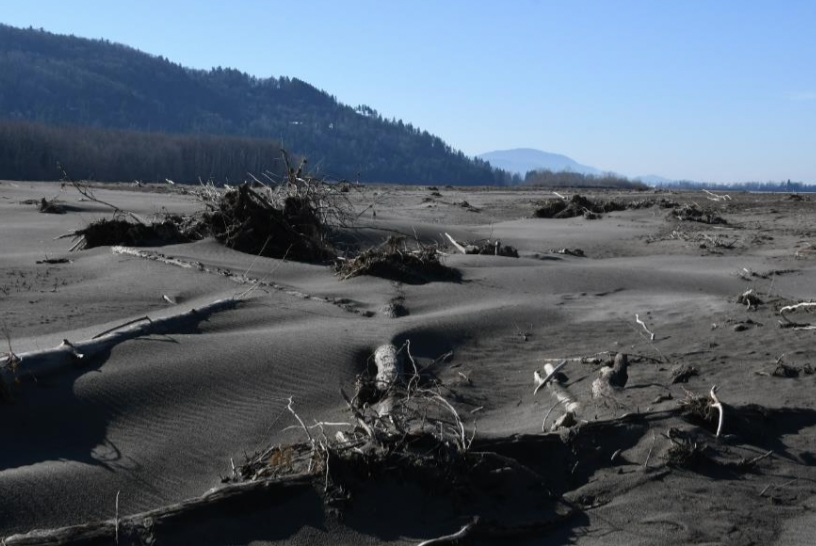 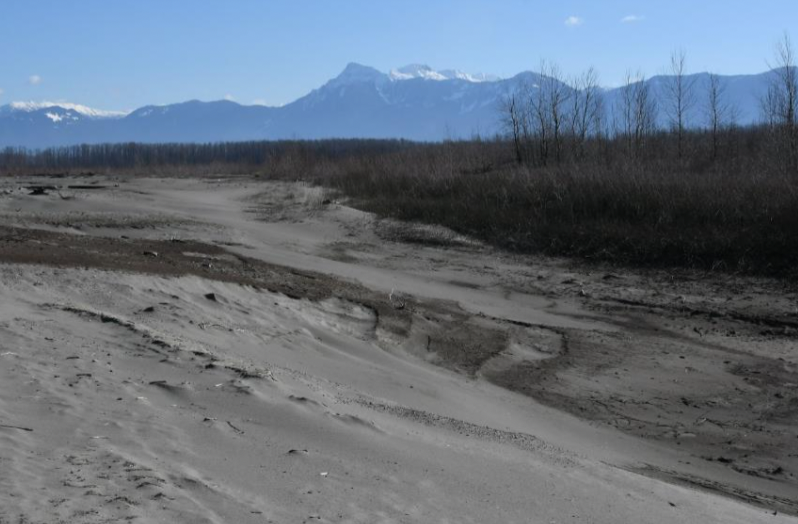 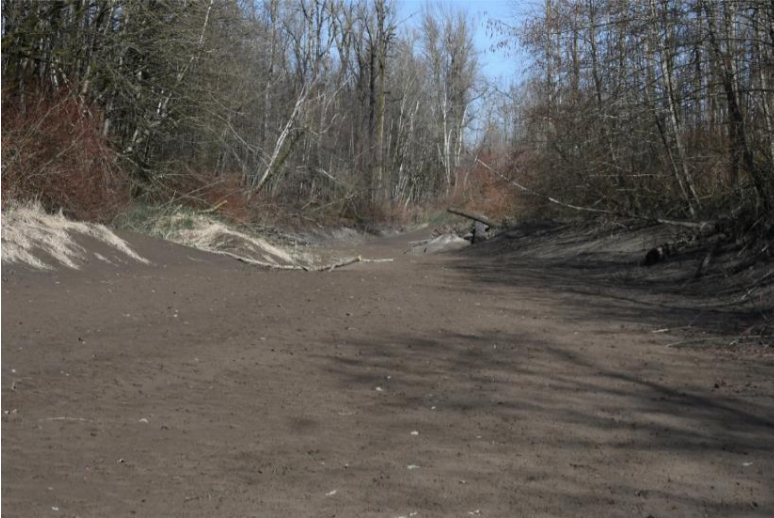 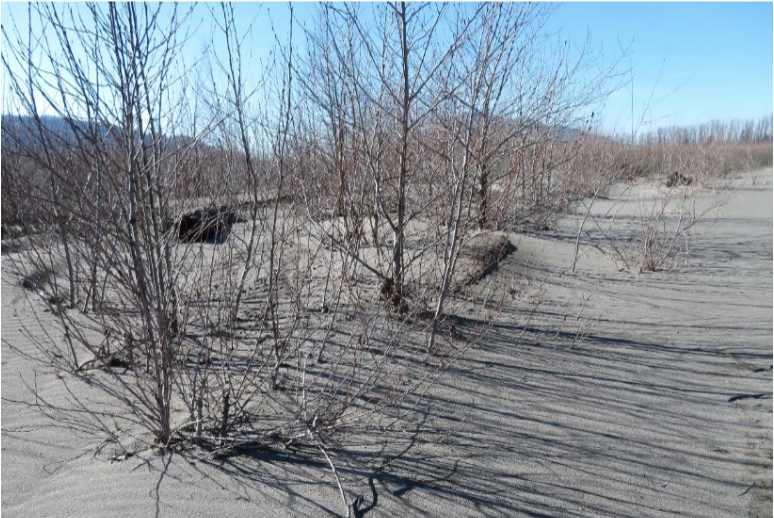 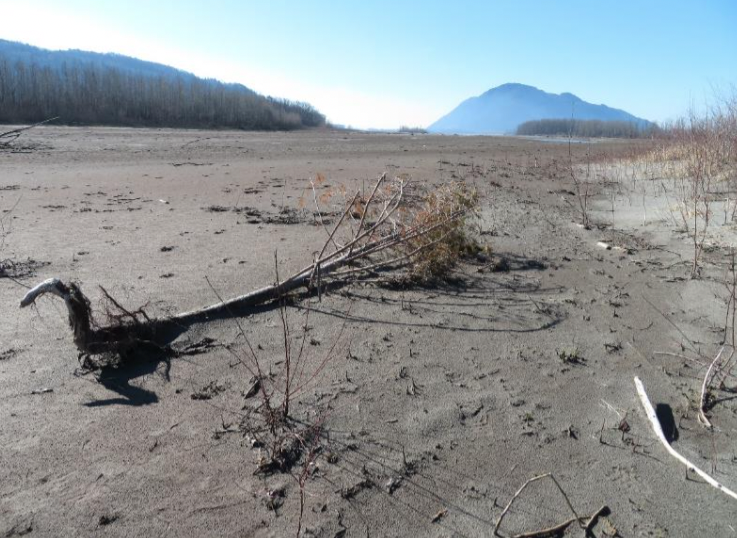 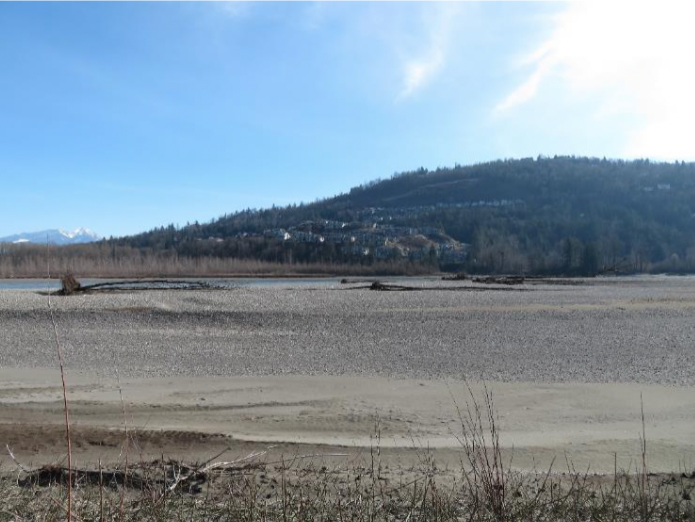 Gravel bar forming beyond the south facing shoreline of the islands; power of the 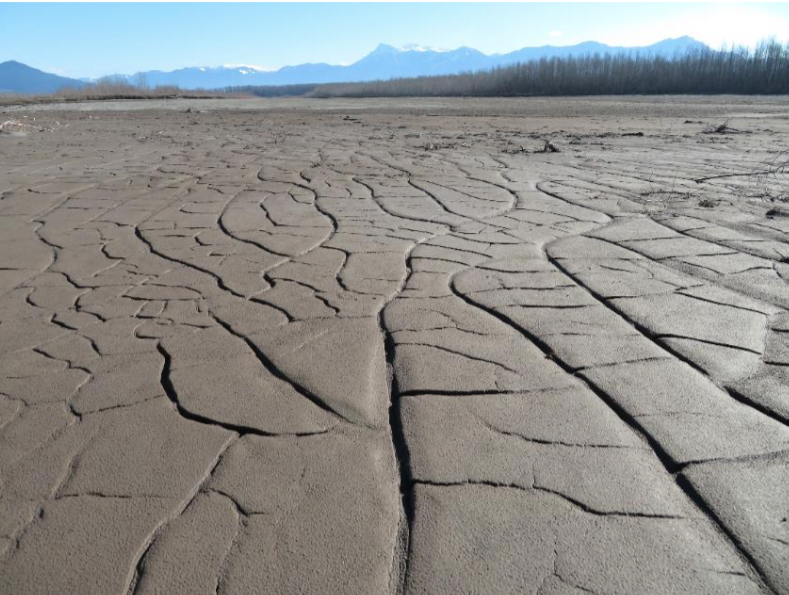 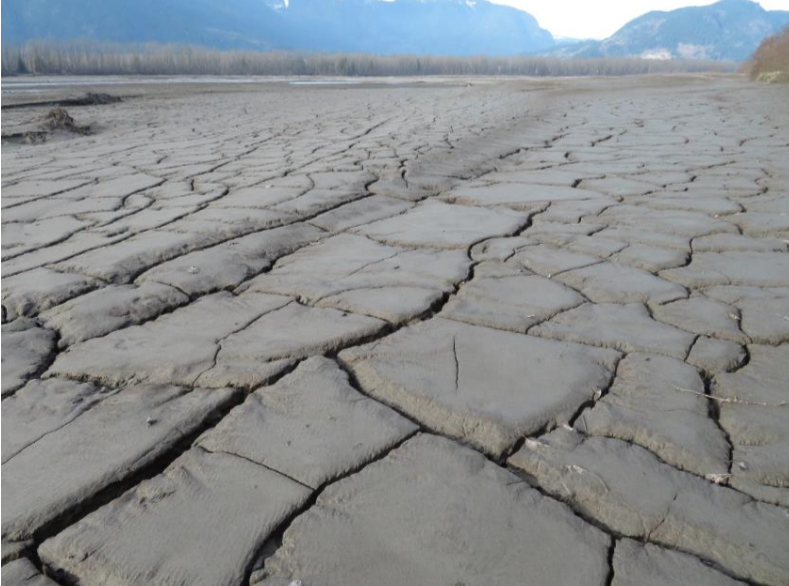 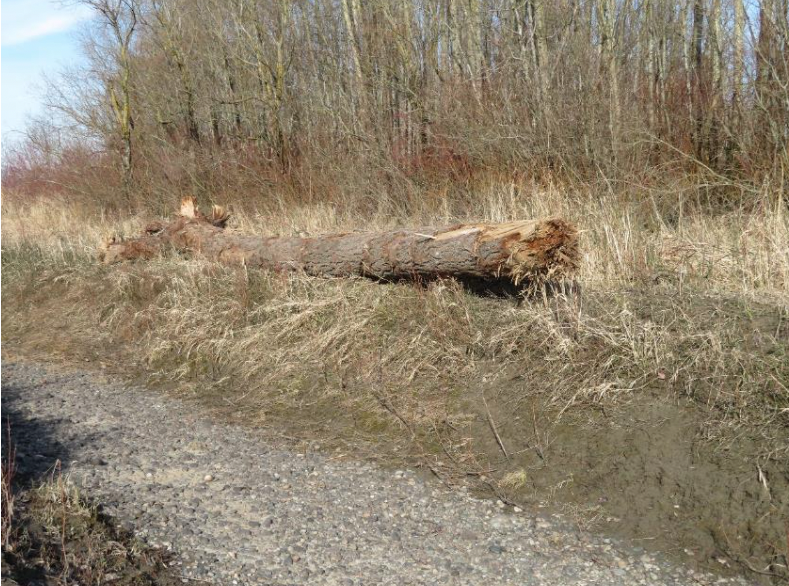 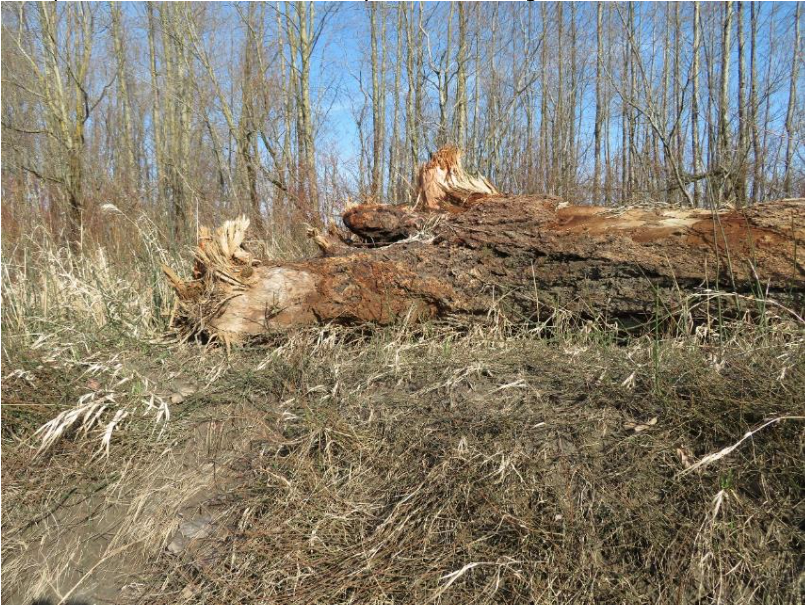 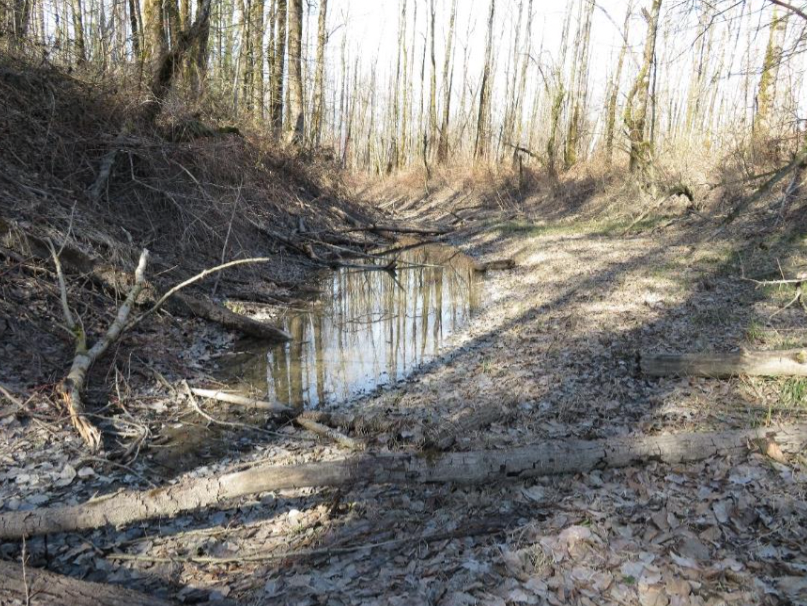 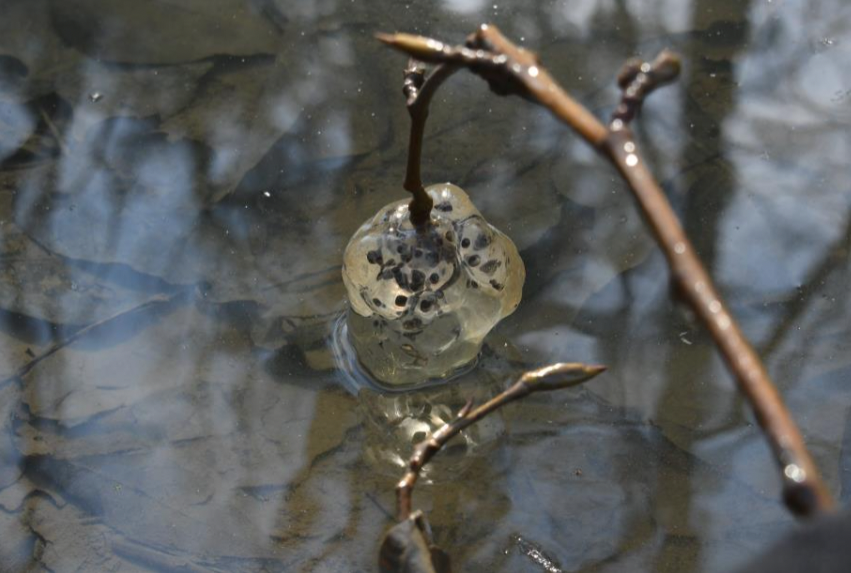 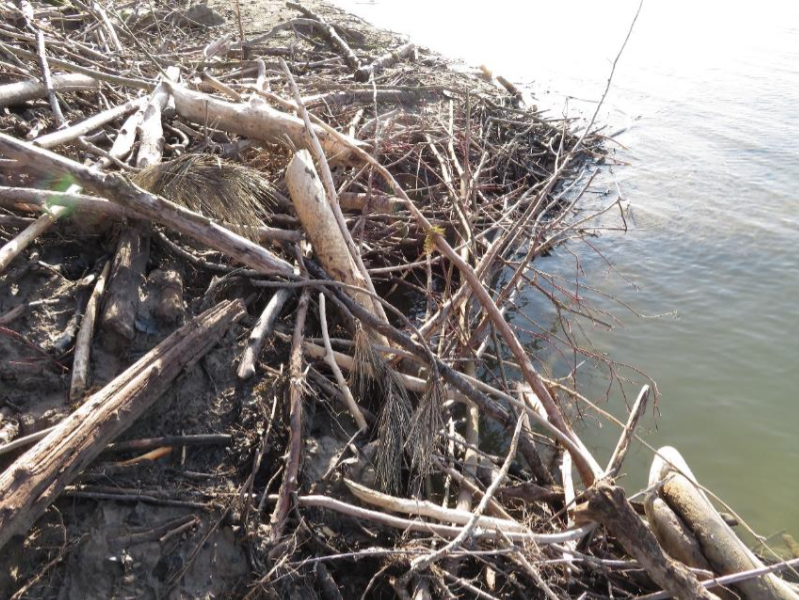 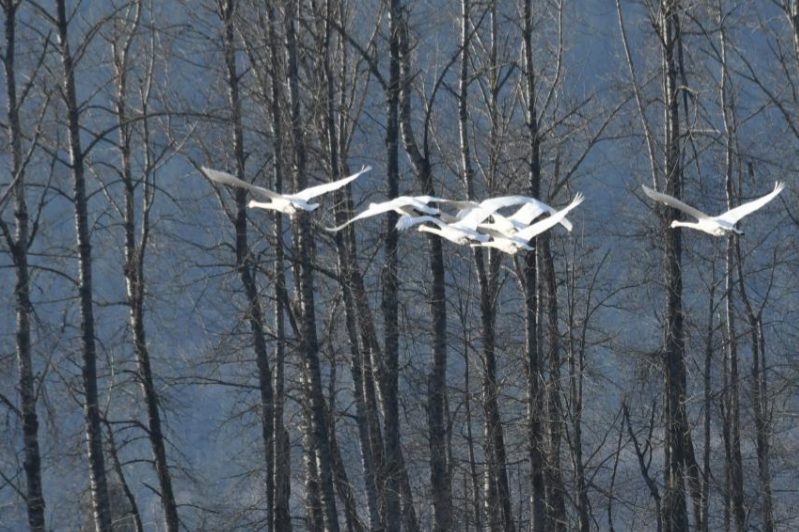