Excellent photos at the end! Thanks Bev and Bill

Walking and paddling distance about 16 km

Most dramatic observation today was the extent of gravel/sand accretions and erosion of the islands by the Fraser River during its last freshet. The freshet causing these major landform changes would have been late May 2018. We were not able to make a fall visit in 2018, so this was the first time we have viewed these changes.

Environment Canada’s historic water level graphs shows a level of 9.04 metres at Hope and 6.0 m at Mission in late May 2018. Historically that is a high level, higher than the 2012 level, but not up to the big floods of 1948 nor 1894. In May 2018 with the high water levels, website search shows articles in the Hope Standard about the 1948 flood and the City of Chilliwack issued “High Streamflow Advisory” for the Fraser Valley from May 18 through to May 31 by which date the water levels were declining.

Gravel bar, sand banks and erosional changes to the ER include;

 Largest inner swale that is oriented crosswise to the river is now almost entirely shut off and dry at today’s water level, except for its southern end

 Accreting island to northwest of the ER continues to grow

 Downstream tip of the islands continues to grow

 Southern side of the upper and lower islands, fronting southwards towards the main channel and facing Chilliwack Mountain, continues to erode along its entire length of shoreline. The most downstream (southwesterly) island has now eroded through so that the main river channel flows directly into what used to be a mostly dry swale (channel) at today’s water level. The water flow from the main channel is not a strong current but a back eddy pond.

The purpose of this reserve is to protect the undisturbed and uncommitted deciduous alluvial forest islands, together with the erosion and accretion of these undyked islands. However, these shifting islands highlight the need for a boundary adjustment to this ER, as much of the islands now extend beyond the fixed boundary, while much of the area within the boundary is now under year round river flow. We will resubmit our proposal to BC Parks to extend protection for this ‘shifting’ ER with recommendation for designation of a Management Wildlife Area designation, extending out to the deep main channel flow of the Fraser River that surrounds this group of islands.

We landed our canoe and kayak on the gravel bar within sight of the Bald Eagle nest. The old nest used for over a decade is empty but there is a new nest about 40 metres westward in the same stand of large cottonwoods. With the spotting scope we could see an adult BAEA sitting in the nest. Another adult was feeding along the river shoreline.

We walked to the upstream tip with a watchful eye for BBPL, noting the extensive changes in the landform. No plovers observed along this northeastern shore, but in several locations Common Mergansers were loafing along the shoreline, likely migrating inland up the Fraser River corridor. Total count for the day of COME was 60.

We rounded the upstream tip and headed back down the southern facing eroding shore, noting how the wind had picked up and new erosion areas. One open gravel swale area had been used for skeet shooting practice and we could see a few used shotgun shells. The distant horizon provided beautiful clear views of Chilliwack area mountains with snowy peaks enhanced by dark circling clouds circling.

Back near the eagle nest tree we found that the large cross channel which had been very slow moving pond over the past decade was now mostly dry and we were able to walk southwards through it. Towards its southern end there was a deep pond, from which we flushed a pair of Wood Ducks. The pair looked to be in good habitat for nesting with branches overhanging the pond and fairly large trees likely with some nesting cavities, beyond. The increasingly deep water as we approached the main river channel prevented our crossing to continue further downstream. We considered bushwhacking through vegetation to circle around, but there were too many invasive Himalayan blackberry bushes. The blackberry has continued to expand in the understory and along the edges of the open swales. We choose the easy route which was to return to our boats and paddled/drifted down the calm water side (northwest facing) to near the downstream tip. We observed large flocks of Mallards and Wigeon loafing on the accreting island to the northeast.

Next we walked up the wide central swale. From the first small pond near the downstream tip, we flushed another 5 Wood Ducks, 3 M and 3 F. Interesting to see this number of Wood Ducks as we have not recorded this species in recent years.

This central swale (channel) had remained much the same since we first became wardens in 2003, providing an easy path between the two downstream islands. We were startled to see that the island on its southern side has eroded right through to the main river channel. The former wide island is now better described as a ribbon shape, with a break half way along its length. The erosion of this island’s southern side facing the main channel and Chilliwack Mountain has been noted over the past decade. Last year’s freshet has finally breached this island.

We returned to our boats and began the task of paddling upriver in the quieter water. As we neared the BAEA nest trees, the wind direction was full on, which made the upstream paddling a challenge, so we choose to walk the shoreline with a line on our boats pulling them upriver. We then portaged across the extensive gravel bar and sand dune that has formed below the Burrowing Owl Dune. No flowing water in this area now. The accreted land here extends considerably out to the main northern channel, so our paddle back to our starting point was straight forward.

Canada Goose 3, pair on downstream tip, one on the accreting island to the northwest

Bald Eagle 4 in total; one adult in new nest and one adult feeding on shoreline nearby, flying over 1 adult and 1 immature

Cooper’s Hawk 1 being harassed by a crow

Beaver – active in many areas; lots of cut and chewed trees on the upper island

Deer – tracks from several deer, saw one in swale near downstream tip

Other tracks not easy to identify as in softer sand 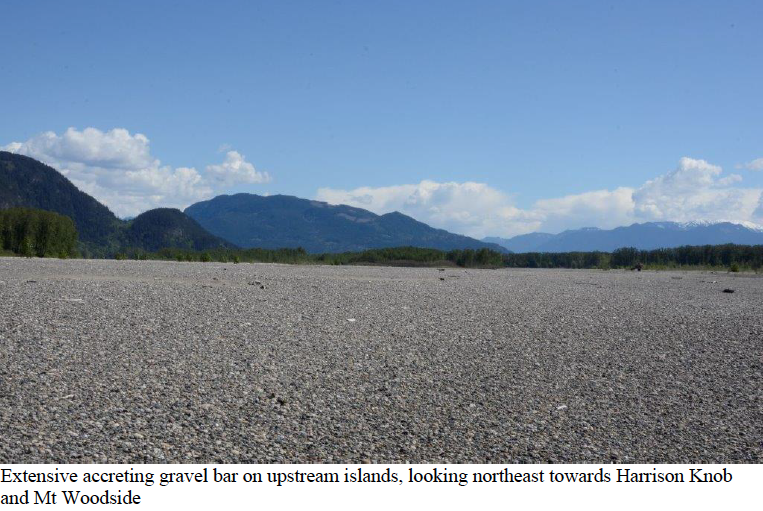 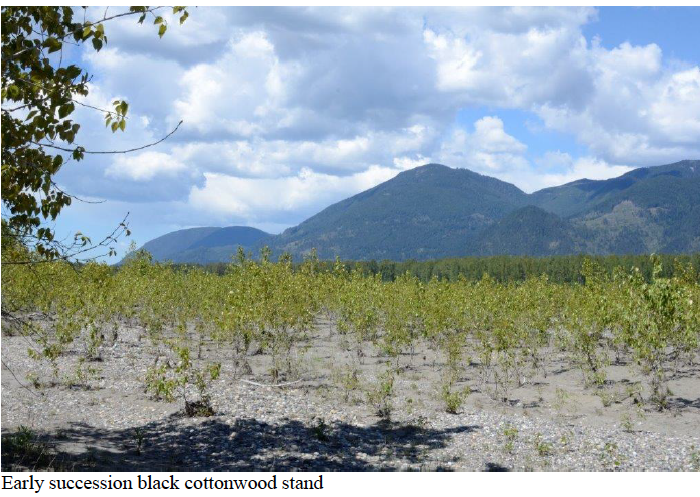 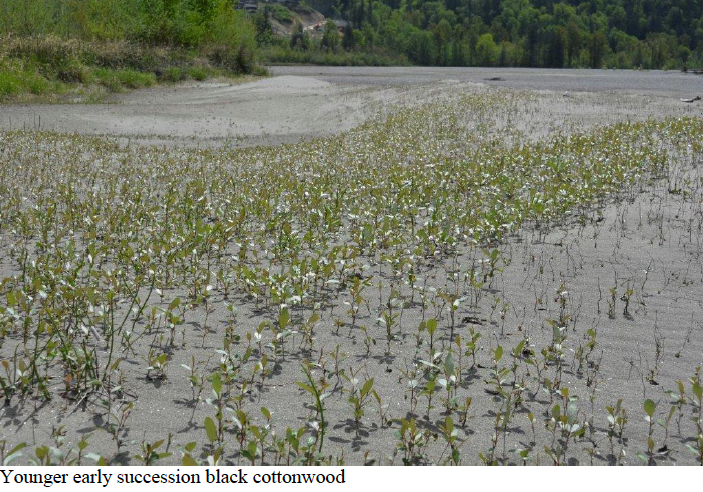 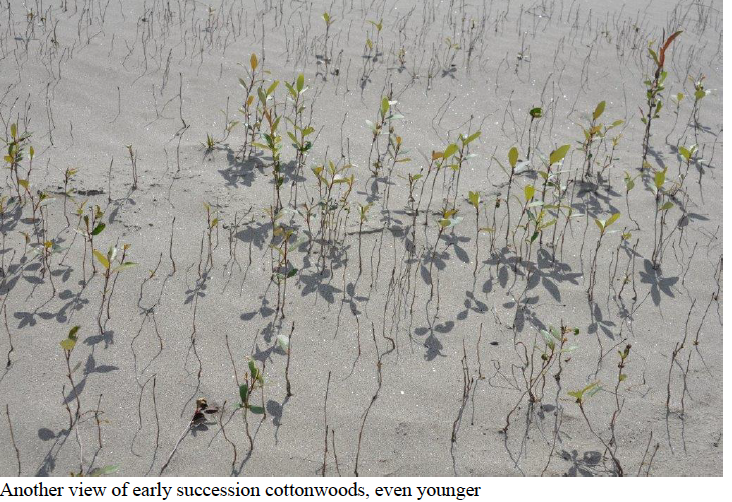 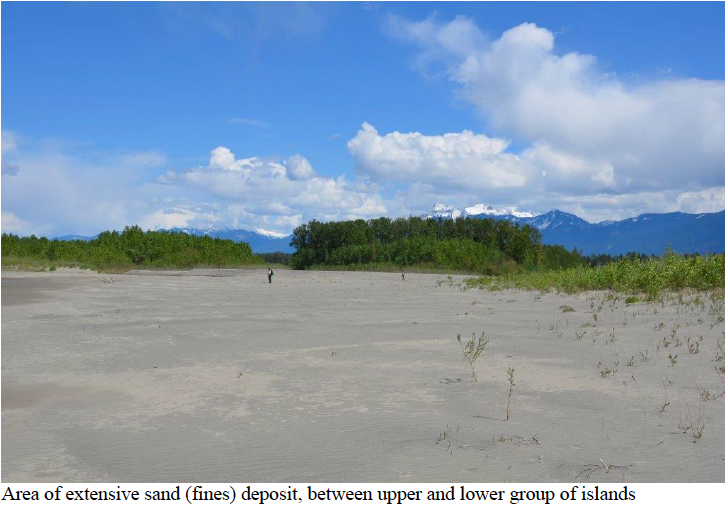 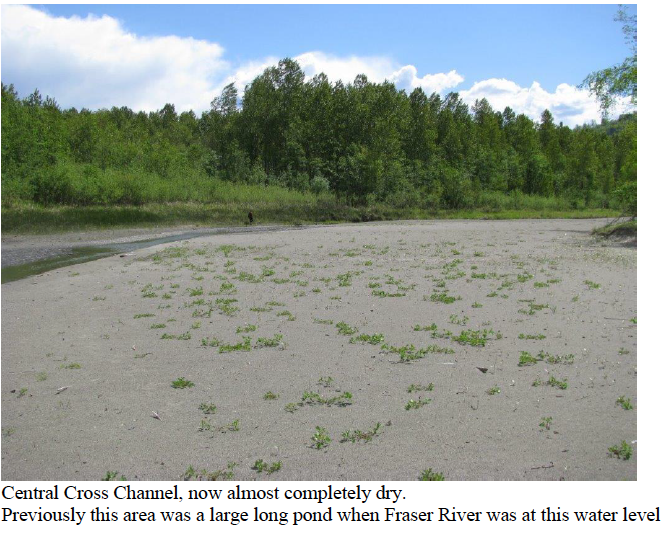 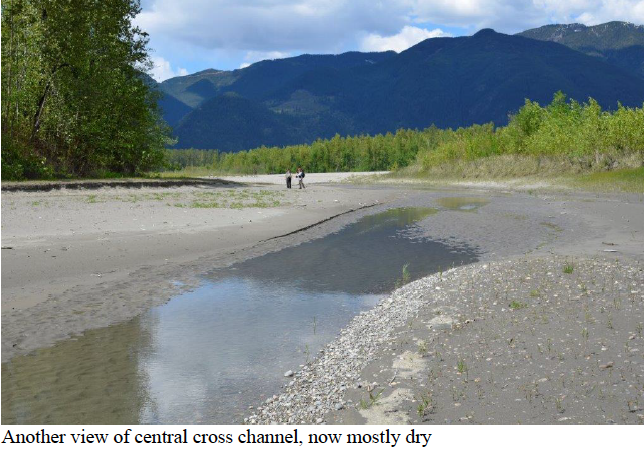 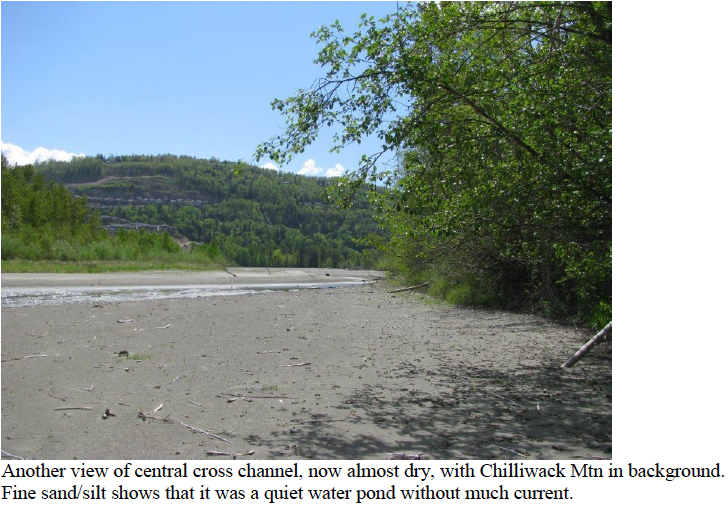 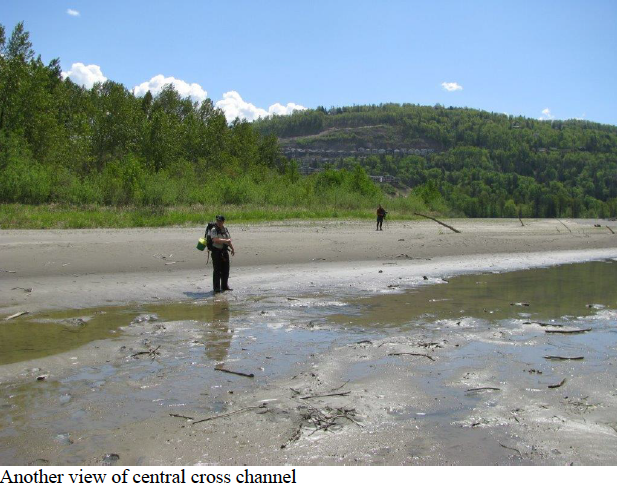 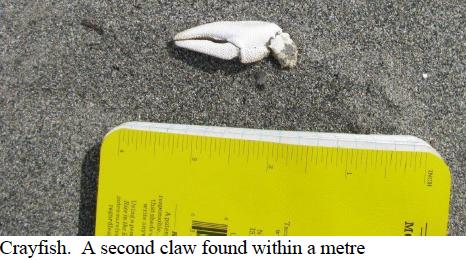 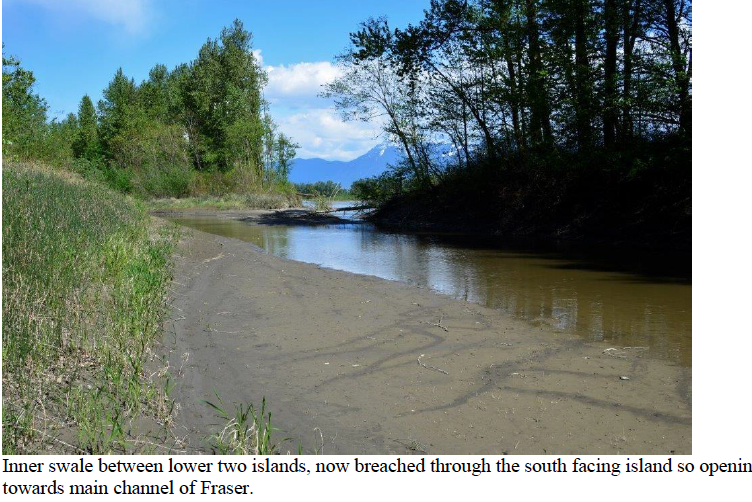 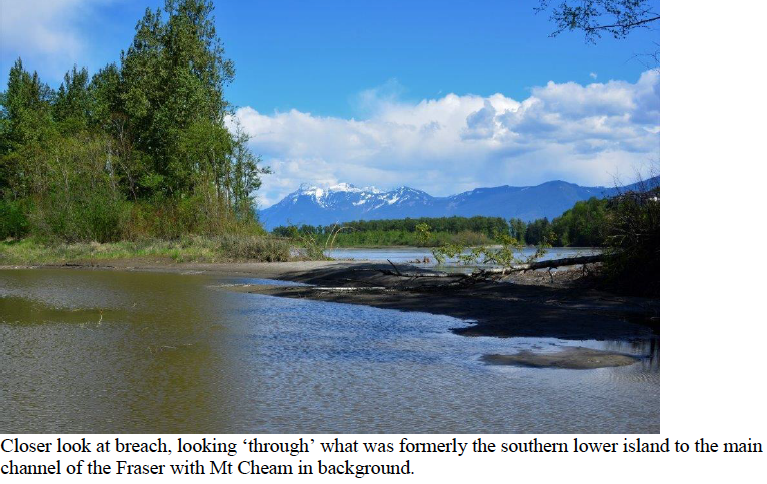 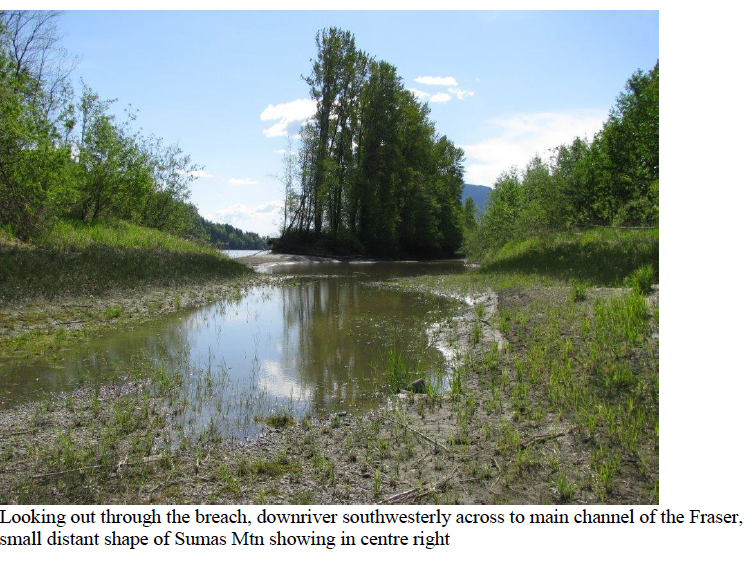 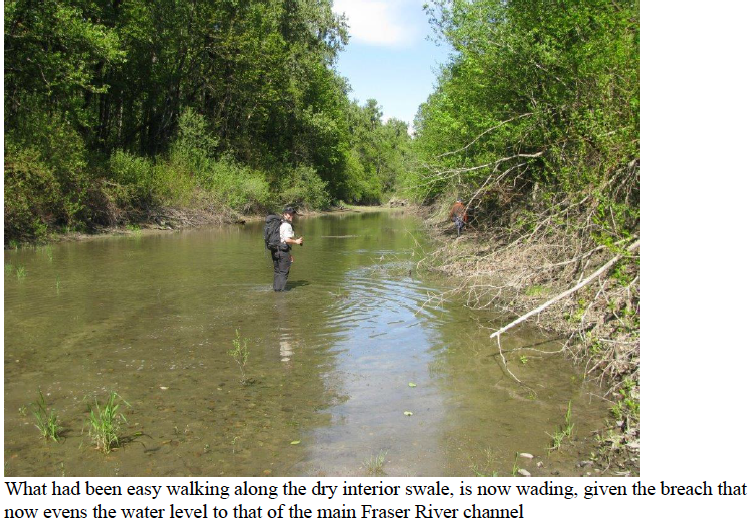 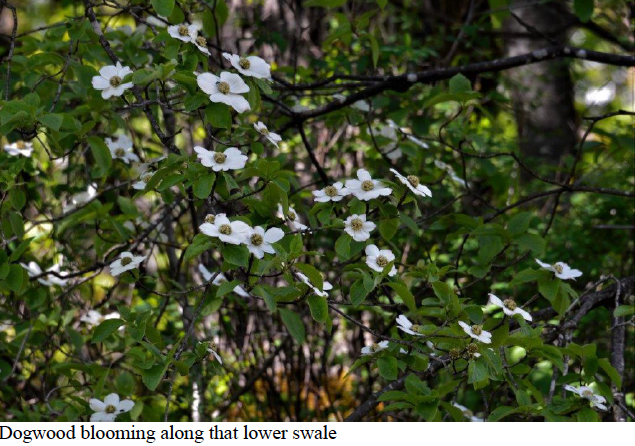