The following is taken from the TIMES COLONIST:

NOTE: This area was in the past proposed as an Ecological Reserve.  We are adding it here to our list of Proposed Reserved 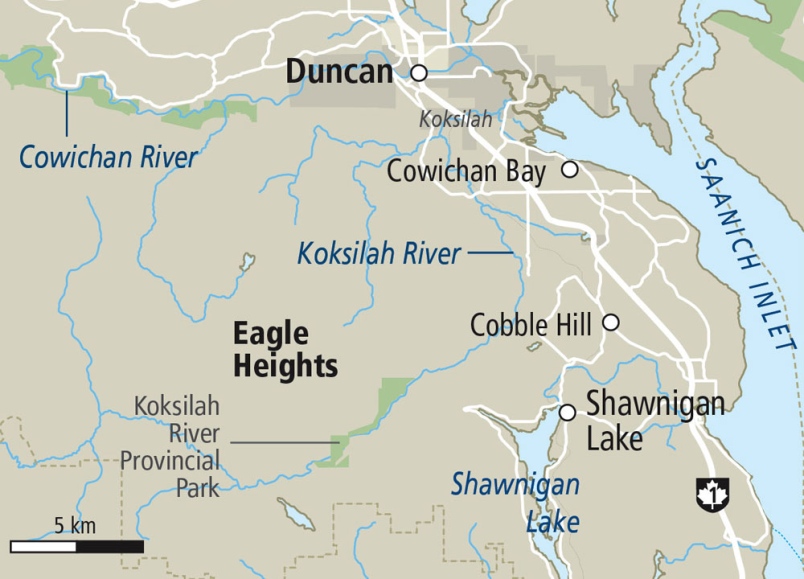 The B.C. government has purchased 190 hectares of ecologically sensitive land from private owners, including a large swath in the Cowichan Valley.

Island Timberlands sold 144 hectares called Eagle Heights near the Koksilah River to the province for $7.15 million, which the Cowichan Tribes says will protect the area from clear-cutting.

“This is increasing the amount of protected areas in British Columbia to 14.4 per cent, which is world-leading in the scope and size of the protected areas we’re keeping alive,” said Premier John Horgan from West Shawnigan Lake Provincial Park on Thursday morning. He was flanked by Environment Minister George Heyman and Sonia Furstenau, Green MLA for the Cowichan Valley.

The land will either be added to Koksilah River Provincial Park, northwest of Shawnigan Lake, or established as a new provincial park.

However, families hoping the acquisition will create more camping spots might be disappointed. “It’s important to remember that protecting areas does not mean campsites, bike trails and so on. It means protecting those areas for their ecological values,” Horgan said.

Avid campers often fight for a spot when B.C. Parks’ Discover Camping reservation site opens for the season, with some booking off work to ensure they’ll have a place to pitch their tent come summer.

Saanich mom Corey Waugh loves to take her two kids camping every summer and knows well the scramble to secure a spot in a provincial park.

But Waugh also recognizes the need to save space for sensitive ecosystems and knows that public campsites can get trampled by campers.

“It would be nice to have more sites, but the demand is always going to be higher than what’s available,” Waugh said.

Cowichan Tribes Coun. Albie Charlie said the First Nation community and the provincial government will work together to decide the best use for the land.

Home to old-growth Douglas firs and rare and endangered species, Eagle Heights is spiritually and culturally significant to the Cowichan Tribes, which has worked to protect the area from clear-cut logging for more than a decade.

“The land is so important, not only to us but to our children, and we must stand together to protect it,” Charlie said.

“Each particle in this forest is a resource to not only our people, but to everyone.”

The Habitat Conservation Trust Foundation contributed $400,000 toward the purchase of Eagle Heights and the Cowichan Community Land Trust provided $225,000.

The province also acquired land on Galiano Island, the Sunshine Coast, the Kootenays and the Okanagan that, along with the Eagle Heights land, is valued at about $10 million.