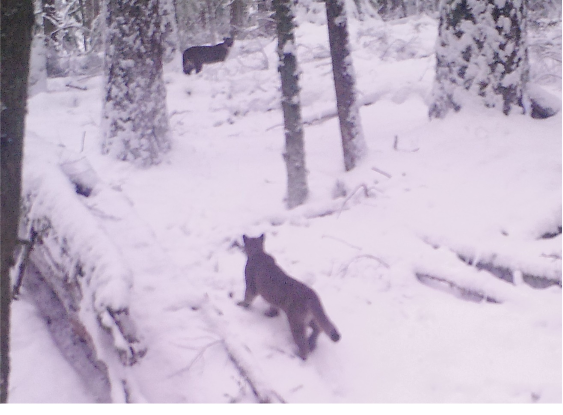 Two cougars apparently hunting along Chef Creek in the snow

Ecological Reserve Warden 2017 Annual Report.
Bowser ER January 25 th 2018
Wardens : Bill Image, Gerry Van der Wolf. Peter Spodzieja
Volunteer hours logged in 2017 : 200. Visits : 14. Mileage : 1000 kms.
Summary of activities.
January 3 rd and 26th
Made an approx. 6 km hike from FSR gate west to west boundary, south along Chef Creek and looping south and east to join the gravel pit road, and back to the gate. Relocated the trail cam at a gulley close to the creek. Observed evidence of some wind fallen trees having been cut up just off the FSR, but notrees cut down. Part of a kitchen renovation was found dumped with the garden debris at the gate.
26 th . Approx. 5 ½ km hike in the opposite direction to the 3 rd , including the wetland and beaver pond,and looping back to the start point. Relocated the trail cam overlooking a gulley with well used gametrail. Put up 2 birdhouses, 1 at creek and 1 at the beaver pond.
February 25 th
Approx. 2 km loop. Entered the west side of the ER via Cook Creek Rd, crossing the creek to check the camera. Two cougars captured on film heading north along Chef Creek during the heavy snowfall a few weeks earlier. Left camera in place, hiked north along the creek and exited the ER where the ER boundary separates from the Creek. Found cougar tracks following the creek about 200m north of the camera.
March 30 th .
Approx. 4 ½ km hike. Entered ER from an old access 1.5 km from the gate, past the beaver pond. Check camera and relocate it to where the bears were seen before. Checked huckleberry study bushes and exited the ER near the FSR gate. Found amphibian egg sacks at the beaver pond.
May 11 th .
Drove the FSR past the ER accesses and nothing new observed except more garden waste at the gate. Removed some broom bushes from the gravel pit area.
May 25 th .
Approx. 5 km hike. Entered on the 1.5 access, to the beaver pond over to the creek, then north through the squirrel study area. Repositioned the trail cam at a hollow tree stump that showed signs of occupation. Cut more broom at the gravel pit, just outside the ER.
June 12 th .
Approx. 4 ½ km loop hike from the 0.2 km access, through the middle of the ER over to the western
boundary and back through the northern section. More garden waste at the gate, and some small
amounts of garbage picked up. Nothing recorded on the camera at the hollow tree, so the camera was relocated . Douglas firs 280 in in circumference found and coordinates recorded.

July 13 th .
Approx. 2 ½ km hike in from the 0.2 access to the huckleberry study area to inspect bushes and count berries on the marked stems.
August 5 th .
More garden waste at the gate area. Entered the ER at the 0.2 access and hiked in to the berry study
area. Collected berries for weighing and measuring. Completed an approx.. 3 km loop from the berry
patch north about past the hollow stump.
Sept. 1 st .
More garden waste at the gate. Entered the ER along the 0.2 access and completed the first squirrel
transects, and recording observations. Relocated the trail camera and checked the SD card. Removed some holly. Approx. 4 km loop.
Sept. 15 th .
More garden waste at the gate including ornamental grasses. Completed second squirrel transects and recorded observations. Entered the ER along the 0.2 access then proceeding on the opposite direction on the squirrel transects. Checked the trail cam. Exited ER on the gravel pit road. Approx. 4 ½ km hike.
October 6 th .
Garden waste pile at the gate noticeably higher. Entered ER at the 0.2 access and complete the third
squirrel transects starting at T3 waypoint. Exited ER along the gravel pit road. Approx. 4 ½ km hike.
Nov.10 th .
Approx. 3 ½ km hike SW across the ER from east to west, starting at the 0.2 access and exiting the ER at Chef Creek. Checked camera, and visited the beaver pond.
Nov.27 th .
Approx. 4 km loop hike across the central section of the ER through the berry study area, over to the
beaver pond, check the camera.
] Additional Notes
The ER was visited by the Volunteer Wardens 14 times during the year. Each visit consisted of a drive up the length of the main Plantation Road, and included a 2/3 hour hike in the ER on various routes that covered the complete ER over the year.
We continue to remove any invasive species or small amounts of dumped materials found around the ER. The decommissioning of the access roads(2014)is still effective with keeping vehicles out of the ER and, with the cleaning out of the tip site at 0.8 km, very little dumping has occurred since. Visitor activities seem to be mostly dog walkers on the south, or 1.5 km, access in to the ER, although salal and mushroom gathering can be expected. Fire wood gathering is usually done close to the FSR and away from the ER, although we report any such activity observed, particularly if trees are cut down.
The “cultural modification” of cedars continues, but we are not sure who is responsible and the trees
are currently outside the ER. It would be useful for us to have a contact in the local first nation
community in order to better understand who is doing the stripping, how the stripping of cedar bark
should be done and perhaps other traditional uses of the forest.
More boundary signage is recommended, including an ER information sign inside the entrance to the main plantation road off Highway 19A.
LTEM of selected huckleberry plants and red squirrel transects has continued this year and results
reported. The trail cam reveals a healthy population of deer, as they appear in almost all locations we have set up the camera. Apart from the usual forest birds we saw a barred owl this year, and on the ground we came across a shrew busy at the base of a spruce tree. Grey squirrels have not yet been sighted in the ER. The highlight of the year was the capture on film of two cougars apparently hunting along Chef Creek in the snow – see above