What Does Drizzle Lake ER and Superpredator Humans Have in Common? 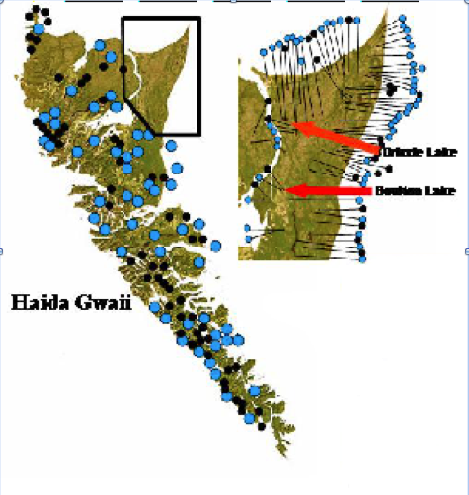 From The Friends of Ecological reserves Newsletter Autumn/Winter, 2016
By Louise Beinhauer

Two late summer articles, one appearing in Science an online Journal of original scientific research and the other in Smithsonian Magazine, whose focus was on the research of Tom Reimchen, Chris Darimont, Caroline Fox and Heather Bryan caught my attention.

The article in Science is entitled “Superpredator humans are hunting other animals out of existence” by Elizabeth Pennisi and referred to Chris Darimont and Tom Reimchen’s newly published study entitled “The Unique Ecology of Human Predators”. The article stated that after a decade of compiling and analyzing 300 studies, Reimchen, Darimont and their fellow researchers came to the conclusion that predators like humans, wolves and grizzly bears kill wild herbivores at about the same rate, but humans kill large carnivores at nine times the rate of other predators. (predator – defined as ‘an animal naturally preying upon others’ – OED) And alarmingly, humans kill those carnivores, not for food, but for trophies or to eliminate them as competitors.

The article goes on to further state that the toll on fish is even greater. Reimchen and Darimont, both professors at the University of Victoria, report that people catch adult fish at a rate up to 14 times that of other predators. Thanks to large fleets of fishing factories, the annual human toll on marine fish may exceed 100 million tons and what is worse, they focus on catching large adults, removing these individuals in their reproductive prime.

The Smithsonian Magazine’s article entitled “Modern Humans Have Become Super Predators” by Sarah Zielinski is also based on this same research by Reimchen, Darimont, Fox and Bryan. She states that the study got its start back in the 1970s when Tom Reimchen was studying predator-prey interactions in a remote Canadian Lake. Specifically he and his students were studying the effects of trout, loons and other predators on stickleback fish.

Despite the number of predators, the stickleback population remained steady, the premise being that this was because they consumed fry, juveniles and sub-adults and fed only on five per cent of reproductively valuable adults each year. This contrasted dramatically to the commercial fishing activity in adjacent marine waters where 40 to 80 per cent of salmon and herring caught were of reproductive age. This led to Reimchen collecting data from other studies that looked at predators, including humans, and the prey they were consuming. He and his colleagues gathered more than 2,200 data points on 399 prey species from every ocean and continent except Antartica.

Chris Darimont stated that humans target adult animals for many reasons including the fact that older animals provide more meat. Also, most fisheries and wildlife management plans call for adults to be harvested, thinking this will free more food and other resources for juveniles. Those juveniles then grow to become adults available for harvesting in the future. Darimonts believes that this practice can have ramifications, especially for fish. Old, large fish tend to produce more offspring. Removing those fish lessens the reproductive capabilities of the population and may even affect the evolution of a species.

So what could these articles have to do with Ecological Reserves? Well the answer lies in the fact that Dr. Tom Reimchen’s first studies from 1974 to 1997, were conducted from a field station at Drizzle Lake Ecological Reserve. From this field station, the researchers would study some 700 lakes and ponds in the Haida Gwaii archipelago to assess the distribution and characteristics of the Threespine Stickleback (Gasterosteus aculeatus).

Eventually Reimchen would focus on Drizzle Lake where he monitored predator diversity over 10 years. Total yearly stickleback mortality at Drizzle Lake was structured by 23 species of piscine, avian, mammalian and macroinvertebrate piscivores of which the Common Loon and the Cutthroat trout were the major consumers (taken from field notes of Tom Reimchen, see:

Dr. Reimchen has gone on to publish many studies on such things as the seasonal and diurnal abundance of aquatic birds on the Drizzle Lake ER and focussed on the Common Loon and the Red-throated Loon in an 1980 study. He makes note that Drizzle Lake Ecological Reserve was established in 1971 for its unusual population of Threespine Stickleback and as a representative of High Moor bog. Friends of Ecological Reserves helped fund Dr. Reimchen’s studies over many of these years.

In late summer of this year, the Friends of Ecological Reserves were made aware of logging plans close to and over the existing trail access to Drizzle Lake ER. Four cutblocks were advertised by BC Timber Sales, one of which is within 300 m of the reserve. The Board strongly opposed the sale of Block105 and made their feelings known to BC Parks. (see FER website: https://ecoreserves.bc.ca/2015/08/10/drizzle-lake-ecological-reserve-compromised-by-logging-plans/). Tom Reimchen stated that the research investment which is in the order of 120 to 150 thousand dollars would be twice the value of the stumpage. Unfortunately Parks did not agree with our assessment of the risk to Drizzle Lake ER if this cutblock is logged. BC Timber Sales in Haida Gwaii received several bids and issued a licence on Sept 21, 2015. As part of the licence BCTS included the obligation to deactivate the road at the entrance from the highway of block DRL105 to prevent vehicle access following the closing of the licence. The license was issued with a two-year term (legislation does allow possible extension up to four years total). However, this is not anticipated, as the licensee has already started operations in this sale. The logging operations should be completed in well under two years.

The Oxford English Dictionary also defines a predator as a “plunderer” – so there is more than one way to be a ‘human predator’!