The water level was high for this time of year, although similar to last April. Looking back at our trips since 2003, the trend appears to be that water levels in the gravel reach of the Fraser River are rising higher earlier in the spring. (This of course could be scientifically analyzed by comparing the data available on the Environment Canada Water Office Hydrometric data.) The higher water levels meant that the interior swales were mostly flooded.

We met Kurtis Hayne and Heather Ulmer at the boat launch on Nicomen Island. We paddled across the channel to the islands, landing at our usual landing location almost directly across from the boat launch. (Our paddling route is first upriver through eddies along the river shoreline, so as not to be swept too far down river, and then we ferry across the current to the Ecological Reserve islands.) With higher water levels, there were no sandbars exposed, but a few grounded logs and wood debris were present in the shallow riffles.

On landing we had views of a pair of Bald Eagles, one sitting in the nest in the large cottonwood stand, and its partner perched in a cottonwood a short distance away.

We walked towards the now flooded large inner swale between the upper and lower islands, where we observed a flock of Mallards (about 60), plus a few American Wigeon (6). While walking along the sand-gravel banks remaining above the inner water channels, Kurtis noticed an unusually marked beetle amongst the gravel-sand. On closer look there were several of these beetles, which Kurtis identified as Western Tiger Beetle.

Bill continued up the main swale now partially flooded, wading in places, while Kurtis, Heather and Bev took the inland route through an older swale (higher elevation) now vegetated with horsetail and reed canary grass, bordered with young willow and cottonwood. With the warm weather of early April, the trees were almost fully leafed out. We followed a deer trail out to the large interior flooded swale and walked further upriver, but were stopped by an impenetrable wall of blackberry. Bill meanwhile was on the other side of this interior channel, where he could make his way to the shore of the main channel (southeast side of islands) of the Fraser. Here he observed swallows flying over the main Fraser River channel. He estimated at least a hundred swallows feeding, swooping for insects low over the river. The flock was mixed swallows, mostly Violet Green (estimated at 90), with some Tree (estimated 10).

Bill was not able to cross the channel as the water was higher than thigh deep so he returned, waded across in a shallower section and we continued as a group inland, crossing the island to its northern shore and the northern channel of the Fraser. This area of inland vegetation was mostly cottonwoods, with a few willow and almost no Himalayan blackberry. There are a few larger conifers, and good shrub cover of: Red- osier Dogwood, Tall Oregon-grape (in brilliant yellow flower), Snowberry and Red Elderberry. Several native Bitter Cherry Trees were readily identifiable through their white blossoms, almost spent with the blossoms falling off.

While walking through the willow and cottonwood we heard very loud airplane motors. One plane flew by low, just visible through the trees ahead of us. Later we saw fresh plane wheel tracks, in an area that showed many tracks, obviously having been used for landings. Location was the accreting northern side of the island (near where the mussel shells were found).

At the upper tip of island, we once again observed a large flock of Black-bellied Plovers (at least 150 birds) resting along the gravel bar about 5-10 metres inland from the Mew Gulls who were loafing close to the flowing river. We had also observed Black-bellied Plovers in this location on three previous years (April 20, 2013, April 12, 2014 and April 10, 2015). We had not seen plovers during trips in earlier years, although previous trips since 2003 were later in April, and two were earlier in late March. On previous trips we were also not looking closely in this area for plovers and when they are hunkered down amongst the gravel and boulders at the river’s edge, they do blend in. Now after our April 2013 sighting we carefully check this area.

We estimated the number at 150 Black-bellied Plovers, but this estimate may be low. (Last year the count was 275.) We did not have a spotting scope with us this year, so with only binoculars it made the count of plovers difficult. The standing plovers facing us showed their bold black and white markings, which made their count easy. However many of the plovers were hunkered down amongst the rounded river rock (gravel) shoreline with their backs facing us and so were difficult to distinguish from the similarly coloured rocks.

Also on that gravel bar were loafing Glaucous-winged Gulls (20, about half immatures) and large numbers of Mew Gulls (about 150 loafing, while another 150 – 200 were flying low over the northeast channel of the Fraser often swooping down appearing to feed on something, and often appearing to grab at something with their beak and with feet extended (not as graceful as an osprey and we could not see them catching anything). We have observed this behaviour previously, such as April 22, 2006.

There was no visible human trash at the upper tip of the islands and only two old fire pits.

Winds at times were strong enough to be picking up sand and blowing it along in a visible cloud.

From the upstream tip looking back down the main channel, we could no longer see flying swallows. Possibly the wind velocity had increased to the extent that the swallows had relocated to a more sheltered location for their feeding.

We turned around and walked back down the northern side of the island, where we found two shells of Western River Pearl Mussels (similar to those found December 2014, but slightly larger at about 10cm long x 9cm across the two back open shells). These were found in about the same location as in December 2014, along the extensive gravel/sand area reaching out to the Owl Dune. This is the area where the tracks showed that planes had been landing.

Back in our boats, we paddled downriver in the quiet waters along the northwestern shore of the largest downriver island. In the accreting island to the northwest that is proposed for inclusion in the EcoReserve, there were now about 300 Mallards loafing along its shoreline. This may be the

total count for Mallards for the day, as others we observed during the day were flocks of 20 to 30 on various inland water ways, and may all have been part of this group, as the ducks would fly up when we approached. In addition there were two Bald Eagles (immature) on the narrow gravel bar still exposed of this newly accreting island.

At the downstream tip, we continued paddling inland, and then up the central swale. At this downstream tip there was a very strong tree frog chorus (Pacific Chorus Frog) coming from inland on the largest island where we rounded its tip. There was enough water to paddle on the interior swale and current was gentle enough that we could paddle upriver, flushing another group of mallards. There was a lovely flowering Dogwood tree leaning with its blossoms extending out over the inner water channel.

At the upstream tip of this swale we beached our boats and headed for a short walk inland to the first pool to look for frog eggs, but none yet visible. Saw a sucker in the pool.

Back in our boats we easily paddle into the interior cross channel, heading downriver with its current, having circumnavigated this largest island. While paddling this channel, two Red Tailed Hawks flew over us. We drifted past the eagle nest in the large cottonwood stand and were back on the main north channel of the Fraser where we then paddled upriver to the Owl Dune area and ferried across the main channel to the take-out. On the shoreline at the take-out we saw two small dead fish, about 10cm long, which Kurtis identified as Three-Spined Stickleback.

Bald Eagle 6 (including 2 immature, 2 unknown, plus pair adults at nest)

Black-bellied Plover 150 (could be more, hard to estimate at the distance in the river rocks) 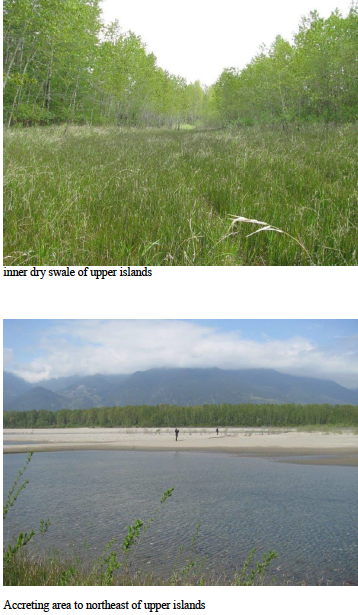 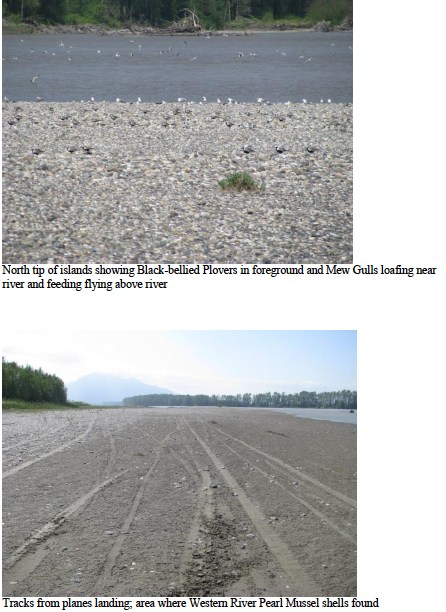 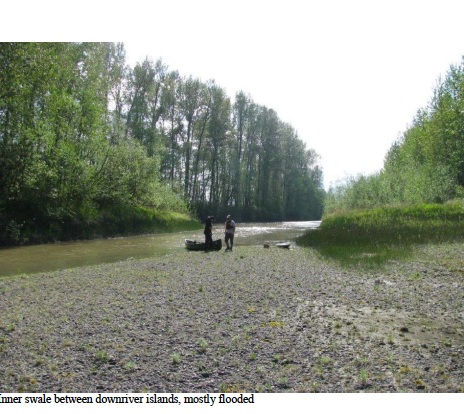