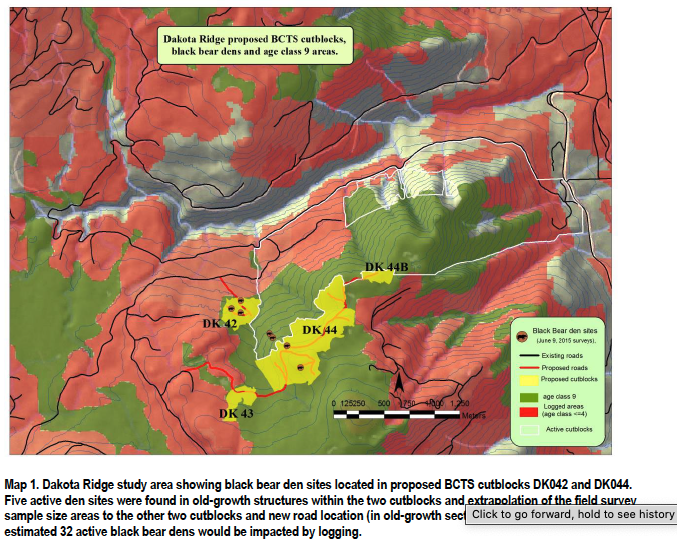 To my knowledge, none of the existing black bear den researchers and guideline proponents have looked at what den protection measures would be needed within the context of coastal landscape with an overall significant loss of old-growth den supply, such as we have documented for the Sunshine Coast, in comparison to the amount of surviving old-growth den supply and sites where recruitment of new dens could occur. While perhaps the guidelines would have merit where very little den loss has occurred I am hesitant to endorse any of them for landscapes that

have already lost so much of their old-growth den habitat.

Windthrow is also a significant threat to small patch protection for standing tree den sites. In these instances of historically degraded landscapes, such as our modeling has demonstrated for high value black bear den habitat on the Sunshine Coast, it would be more important to protect all remaining old-growth forest to help balance off the large and growing imbalance of plantation forest versus old-growth forest and the growing list of old-growth dependent species at risk. This is not just true for the old-growth denning needs of black bears (which are not considered at risk in the area) but for the importance of old-growth forests to a whole host of cavity-using vertebrates, some of them sensitive or at risk. In this regards, the report by Bunnell (2013) is instructive, particularly his conclusion that in order to protect all of the cavity-using species, some portion of the landscape should be left “unmanaged,” and that as more and more old-growth is removed, the list of species at risk only increases.

From this perspective, my professional opinion would be to recommend that all old-growth within the 2,616 ha Dakota Ridge black bear den study area not be further logged but be set aside as a benchmark area for its very high value for black bear den habitat and for other old-growth cavity-using vertebrates.