Sunny, clouding over in afternoon with strong winds; 10 – 12oC

(Very high water level for this time of year – previous early April, late March water levels have been about a metre lower at the Hope gauge. The higher water levels meant that the interior swales were flooded.)

We met Kurtis Hayne and Heather Ulmer at the boat launch on Nicomen Island. We paddled across the channel to the islands. Some grounded logs and wood debris were present in the shallower parts of the river, but no sandbars were exposed. The higher water level meant that the gravel bar shoreline where we usually land was mostly flooded. A new bird species for the ER was sighted at landing – about 30 American Pipet were feeding along the colonizing vegetation of the remaining exposed gravel bar. They are probably on spring migration to alpine and tundra habitats in BC, Yukon and Alaska.

The pair of Bald Eagles was at their nest site in the large cottonwood stand, with one eagle sitting on the nest and its mate perched above.

We walked up river, but with the higher water could not get across the channel now flooded to the “Owl Dune” area (named after the Burrowing Owl found there last April). River must have been higher a short while ago as there was substantial silt-mud that clung to our shoes. (The hydrometric graph confirms this as the level at Hope on March 22 was 5.2 metres, while by April 1st the level was 6.6 metres and today it was 5.6 metres). Tracks of animals in the ‘silt’ were very obvious and distorted: deer and fawn, heron, goose and beaver. No success in finding the freshwater mussels (shells found last December) as water level much higher today.

At upper tip of island, we observed a large flock of Black Bellied Plovers (about 275 birds) resting along the gravel bar next to the flowing water. This is the third year we have observed Black-Bellied Plovers in same location in early spring. Likely they are on spring migration to far north tundra of Alaska, Northwest Territories and Nunavut. Also on that gravel bar there were loafing Glaucous-winged Gulls (55, mostly juveniles) and Mew Gulls (15). Some of the immature Glaucous-winged Gulls were playing in flight by picking up a twig or other small item, flying high with it, then dropping it to quickly catch it in air. Three Great Blue Heron and five Dunlin were seen in this area. The amount of trash at the upper tip area was low compared to previous years and only two fire pits were visible.

We rounded the upstream tip and continued walking down the southeast side of the island. When we reached the large interior swale that we normally would have walked along, it was filled with flowing water, so we had to proceed by bushwhacking through the willow-cottonwood-horsetail areas. Willow shrubs populate the open edges, giving way to Cottonwood further inland. Extensive areas were growing in with Himalayan blackberry, however some larger conifers stood high (Sitka Spruce and Douglas Fir), and there was good shrub cover of: Red- osier Dogwood, Tall Oregon-grape (in flower), Common Snowberry and Red Elderberry.

Several native Bitter Cherry Trees were readily identifiable through their white blooms. We reached another inner swale, vegetated only with horsetail, so this made for easier walking along an animal trail back to the large central open area between the upper and lower islands, and to our boats. Along this inland route we saw 3 or 4 coyote scat, which looked like their diet consisted of plants (roughage) and small rodents.

Coming out to the large central open gravel-sand-silt area, now flooded, we flushed a large flock of mallards (200). An immature Golden Eagle soared overhead, harassed by two crows. From noon onwards we saw Violet-Green Swallows feeding over the river and mud areas, at first two, and by the late afternoon at least 10 visible at one time, still flying despite the strong winds.

In our boats, we paddled downriver in the quiet waters along the northwestern shore of the larger downstream island to near its tip, where we found a large hunting blind. This blind was adjacent to the quiet channel area where large flocks of ducks are commonly found resting. It was constructed with a dug bench covered with an 8’ long board for seat, plus screening staked up around the front and with a tarp cover. We picked up 72 shotgun shells and several beer cans, and then removed the structure (stakes, heavy wire mesh, tarp, and garbage).

We next walked the short distance around to large inner swale between the two lower islands, and flushed about 100 mallards from this large interior sheltered pool of slow flowing water. By this time the wind was picking up so we paddled back upstream, to where we had first landed, and then further upriver to Owl Dune where we landed our kayaks and looked around this area. Found a floating dead Mallard, male. In this area we saw (similar to last year) holes dug, possibly by a coyote feeding on early growth plants. Today we had also seen similar holes in the wooded area on the north central area of the island near were we landed our boats. By now the wind was strong enough to visibly lift sand and silt off the dunes and exposed fine materials on the bars.

Great Blue Heron 3 (all appeared to be first year)

Bald Eagle 6 (including 2 Juvenile, 2 adults, plus pair at nest)

Glaucous-winged Gull 55 (about 4/5 were juveniles)

(Note obvious misses of Black-capped Chickadees, Pacific Wren, Song Sparrow, Spotted Towhee, likely because we spent the morning along the gravel bars with very little time in the deciduous woods. Later, when in the woods, the wind was strong, which hampered hearing birds.) 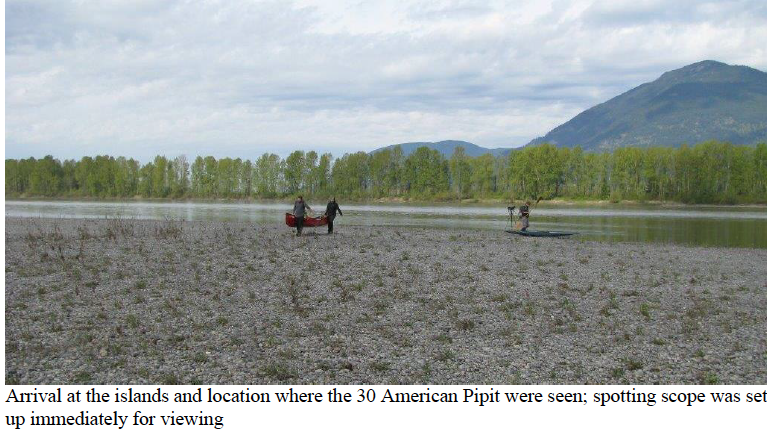 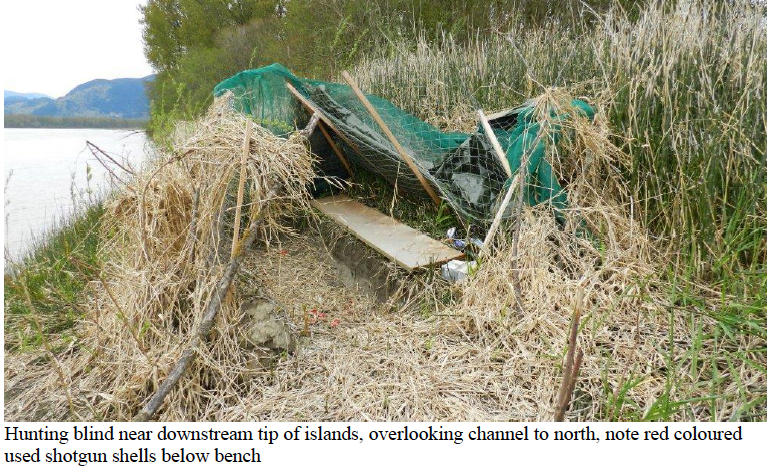