Ecological Reserve Wardens Charley and Mandy  Vaughan made their first visit of the season to Comox Bluffs Reserve on Friday 13, March 2015. 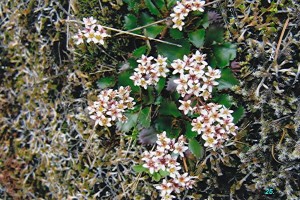 ” The weather was overcast, mild and calm.  At the edge of the reserve we met a couple with a dog who had just come from the main beach access, a common party spot for ATV’ers.  They said there were some kayakers at the beach but very little garbage to pick up; we gladly accepted their word and moved on to the bluffs.  On our way through the woods we noticed deep aggressive ATV tracks showing bursts of acceleration.  We followed the tracks first to the meadow area at the base of the bluffs and then all the way up the hill through the reserve.  The meadow area was delightfully unsullied except for two fire rings which we dismantled.  In the woods I noticed leaves of White-veined wintergreen (Pyrola picta), Prince’s-pine (Chimaphila umbellata) and Rattlesnake-plantain (Goodyera oblongifolia).  Also a very sturdy white shoot which appeared to be a saprophyte emerging, although I couldn’t id it.  As we walked, we heard two Bald eagles, two or more Common ravens, American robins, Dark-eyed juncos and numerous Golden-crowned kinglets.  The little creeks are still running water.  Out on the bluffs, the moss is moist from recent rain.  Seeps show here and there and a wrong step on the steep basalt slopes easily loosens the fragile hold of the moss on the rocks.  Hairy manzanita (Arctostaphylos columbiana) is beginning to break out in flower, as is Kinnickinnick (Arctostaphylos uva-ursi)

and the pretty little white flowers of Rusty-haired saxifrage (Saxifrage rufidula).  In walking the bluffs, I noticed extensive areas of moss disturbance.  One particular section of moss that was turned over on a fairly flat surface was almost 3ft square, but most disturbances were much smaller pieces of moss, although the pieces were dense in number.  In one area, a patch of disturbance edged over a steep slope and I wondered if birds or animals might be involved, searching for insects; although I imagine it would take a bear or the mythical Roc to turn over that large piece of moss.  All in all, except for the worrisome ATV tracks, a rewarding visit.”
Mandy and Charley Vaughan.