This is the latest date (December 7th) that we have paddled to the islands, but the weather forecast looked decent. It turned out to be a pleasant day with sun and not too cold.

Parked and launched kayaks as usual. A truck was parked at lot and we saw a man returning from walking his dog along the dykes. Three Bald Eagles perched in trees along shore near boat launch began this day with lots of eagle sightings.

We paddled across one wide channel to the ER Islands; did not have to carry across any gravel bars, even though the river is quite low. Most fish carcasses have been washed away (note that this was not a year for pink salmon spawning in main channels, which happens in odd numbered years). The water station reports show that the Fraser had fairly high spike flows around Nov 11 (5.4 m at Hope) and again Nov 28 (5.6m). Still there are quite a few eagles visible, mostly perched in trees or along gravel bars, and occasionally feeding on the few remaining fish carcass.

We walked along shore of inner channel that separates the upper and lower islands. Saw tracks from what looks like a small motorized trail bike. Extensive beaver activity along inner channel – tracks, trails, chewed willows, plus large pile of branches above the beaver house in the bank.

The flow of water into this channel has changed considerably. The gravel bar/sill at the upstream end has been washed inland and away. It is however still not possible to cross to the downstream islands, so we retrace back along the shore and then upriver, walking northeast along large inner swale. Some ice remains on pools and it looks like when the pools had frozen the water level had been a foot or two higher. The ice has collapsed down.

The water entrance to this inner swale (from northeast) has also changed. Much gravel has moved off from the upriver sill. Considerable erosion continues all along the islands’ south

eastern shores. With the leaves all gone from the deciduous trees it was easy to see the three larger Douglas fir now as tall as the surrounding deciduous trees. Also apparent in many areas was the red stems of red osier dogwood. Himalayan blackberry vines were also visible, growing under the tree cover, especially along the edges of the many swales, where the blackberry receive more light. Their growth is not too vigorous, as they are mostly in shade, but the vines do add a challenge to bushwacking across the islands.

The upstream end of the islands has a huge flock of Glaucous-winged Gulls, loafing. We counted about 15 fire pits; good to report there was very little garbage.

We returned along the large accreting area on the north side of the upper islands (now extending about 1 km along the island and extending out about a half kilometre. The sand dune area at the

northwest side has changed considerably as the river no longer flows south through a channel. There remain several pools, landlocked at this low water level.

While we are in the area of the large sand dune, two planes fly low overhead and proceed to land at the northeast tip of the islands. The Glaucous-winged Gulls take to the air. Soon after, a motorized trail bike is driven towards us along the north gravel bars of the islands. The rider makes a big circle around us. As he is heading back towards the planes, the planes both take off. So possibly he had off loaded his motorcycle from a boat, but we never did see a boat. He made one other drive-by near us, at which time he saw us, but never came close enough to talk.

We next headed downriver, to get a closer view of the hundreds of ducks loafing along the southwest side of the lower islands. They look to be mostly mallards, and we estimate there to be 400 of them. We decide not to wade across the channel for a closer look, which would have further disturbed them as well as the 15 eagles perched on the island’s cottonwoods. The hundreds of waterfowl extend from the shore, across the small channel to the accreting island. We returned to our kayaks and paddled back.

Back at our vehicle, there was another trucked parked, and four people walking two dogs along the dykes. With dusk, large flocks of birds were flying to perch in a tree about 300 metres along the access road. We approached for a closer look and saw about 500 red-winged blackbirds perched in the deciduous tree.

Coyote – tracks in many places

Mallard 740 (400 loafing on southwest island shore plus in channel there, 40 in interior channel, 200 upriver tip and gravel bars to north, 100 fly over)

Dunlin 2 (ID from photo confirmed by expert; apparently occasionally one does see stragglers this far removed from the ocean inter-tidal) 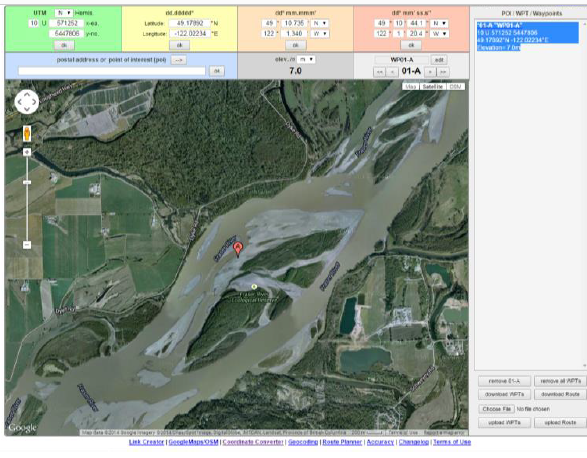 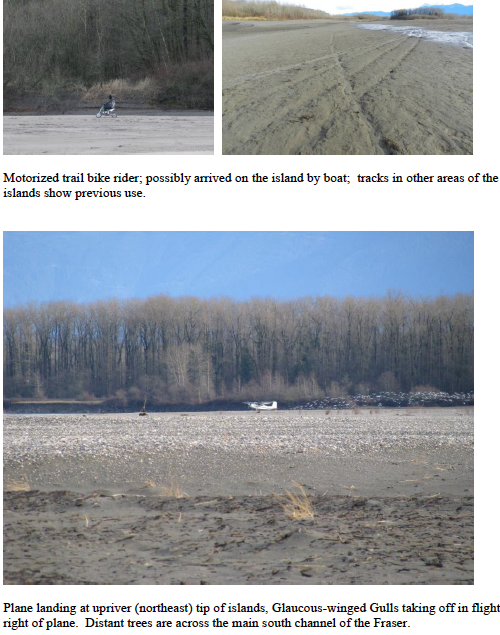 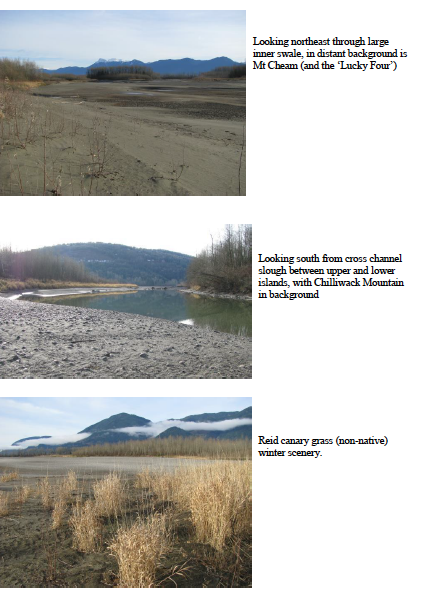 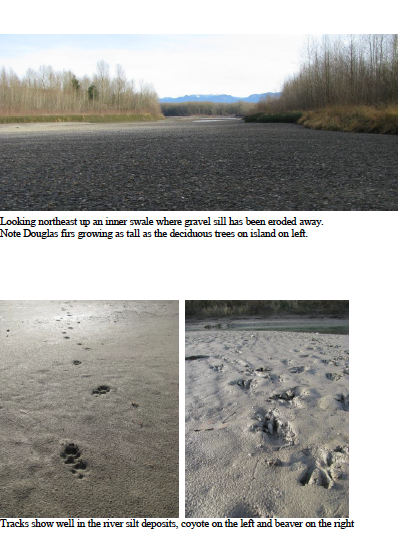