The annual illegal trail survey along the reserve perimeter was done on May 9. No incursions into the ecological reserve were observed.

The snags in the northern part of the reserve, resulting from hemlock dwarf mistletoe infection, show extensive use by woodpeckers. They may be an important resource for maintaining the park’s pileated woodpecker population. A barred owl was heard calling on south side of Imperial Trail on May 9.

A survey of invasive plants was undertaken on the February 29 trip, and results reported to Markus Merkens. Within the reserve and along the eastern and western boundaries there is very little evidence of introduced species as the closed canopy eliminates most sun loving species. The occasional holly (Ilex aquifolium),  European mountain-ash (Sorbus aucuparia), ivy (Hedera helix), and cherry laurel (Prunus laurocerasus) occur here, but are not common. Possibly the most notable introduced organism is the European black slug (Arion sp.). It was seen well inside the reserve during the August traverse. This species is one of the few alien organisms which seems to have adapted well to closed canopy western hemlock forests, and is now common in such sites throughout the Lower Mainland. The north and south sides of the reserve, due to the sunny edge habitat, contain many introduced plants. The most aggressive of these appear to be ivy (Hedera helix), periwinkle (Vinca minor), and Himalayan blackberry (Rubus discolor). There are large patches of ivy and periwinkle on the north side, and periwinkle at the southeast corner. There is extensive Himalayan blackberry along the edge of the Southwest Marine Trail. This is probably the most serious invasive in the reserve. As the canopy is fairly open on the south side, the blackberry is able to penetrate this area.

I had not done a traverse across the reserve for quite a few years. On August 28, in company with Gerald Hempler, who has a gps that functions under a closed canopy, I traversed from Imperial Trail to Southwest Marine Trail. It is now considerably more difficult than previously, as there is extensive blowdown, probably from the 2006 storm event. Another impediment, especially in the northern part, are fallen mistletoe brooms. These become overgrown by mosses, with a hollow underneath. The extensively overgrown ones give the illusion of solid ground until they suddenly collapse. It required over four hours to do the north south traverse. 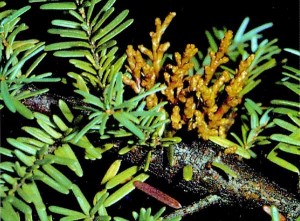 Two extensive garbage dumps containing many bottles, cans, plastic, etc. were encountered. The amount of forest debris on top of them indicated that they have not been active for a number of years. Whoever stayed here must have been very careful not to leave any obvious traces, as I have checked the perimeter trails regularly for any evidence of incursions. Gerald’s gps readings for the dumps are 49 degrees 14.701 minutes north, 123 degrees 13.309 minutes west, and 49 degrees 14.673 minutes north, 123 degrees 13.273 minutes west. In the same general area were two old buckets which looked like they may be from a grow op.