This photo of  the red algae Fauchea lacineata from subtidal Baeria Rocks is used with the permission of  the marine science student  Andrew McCurdy.  I must say it is one of the best pictures of this algae I have seen. This is the true colour when viewed by a diver underwater . It becomes a dull red when taken above the surface. Below is an explanation of how this “structural colour ” is produced . 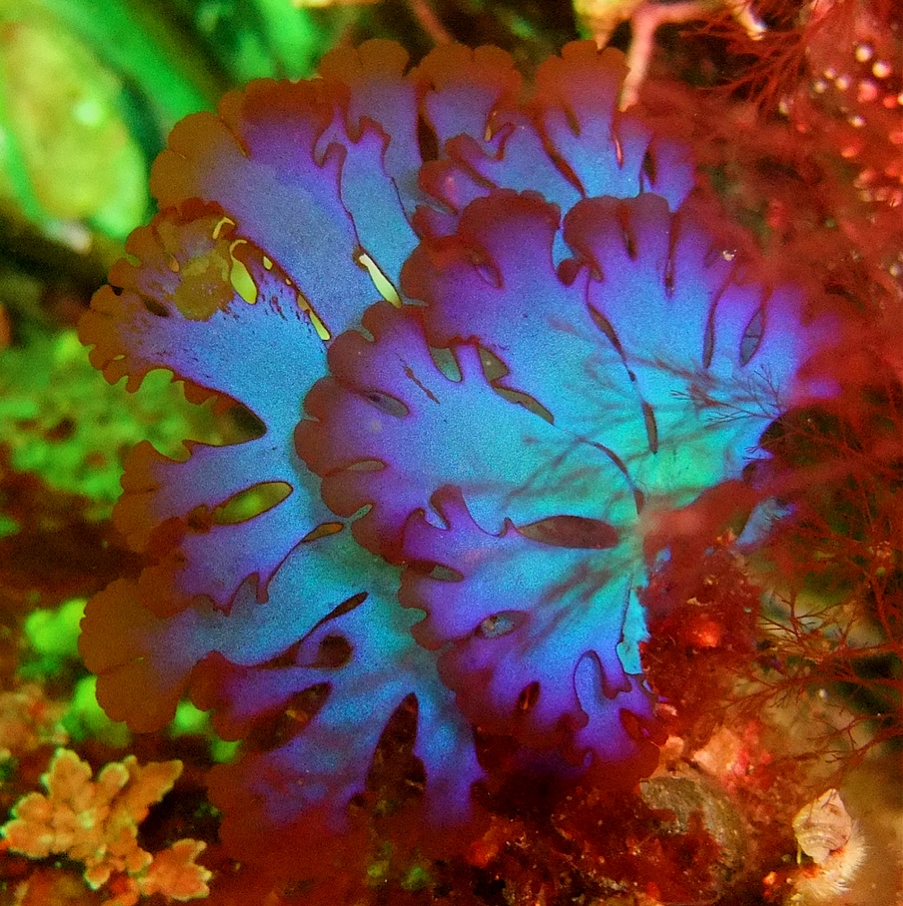 On his Flickr page Andrew, then a student at the Bamfield Marine Station  writes: “Today was exam day for my course. What did I do with my exam day? Well, first off I postponed the exam to go diving…
First dive was a roving survey of Baeria rocks, an ecological reserve in Barkley sound. I found octopus number 12, swam through swarms of mysid shrimp, rode the surge and had a good time.
I was a dive buddy for a DM in training for the second dive. We swam around as she mapped the area and I recorded animal sightings again. We ran into a school of ~50 yellowtail rockfish and ~20 black rockfish. China rockfish were fairly abundant and we also saw a tiger rockfish, which never dissapoint me in their appearance.
Out of all that though, this seaweed is always the attention grabber.“

From the Monterey Aquarium website  we get this explanation by Nicholas Vidargas  for the colour of this iridescent red algae.: See the website for explanatory diagrams.

Iridescence is a feature common to several algae and to many other organisms including butterflies, birds, and beetles. We’ve all seen iridescence on the surfaces of oil slicks and bubbles.. Most of the iridescence we see in the reds is that of a deep blue or purple coming off of the red leaves. The contrast against the red blades provides for a magnificent effect. This color, as opposed to the red that is produced by pigments, is often called structural color as it is produced simply by the structure of the organism in question.

The mechanism behind iridescence in Fauchea laciniata is a phenomenon called “thin layer interference.” Whether in water or as light, waves interfere with each other when their motion vectors are altered in some manner. In a bowl of water or in the ocean one can imagine waves bouncing off a wall and interacting with oncoming waves to make larger crests and deeper troughs. Remember that the light all around us, incident light, is composed of many different wavelengths encompassing the entire visible spectrum. These can be considered independent of each other and acted on differently by different environmental elements.

When very thin plates, or films, such as a coat of oil on water, or the “skin” of a soap bubble, are exposed to light, they tend to reflect some incoming light from their mirror like surface while the rest of the light travels through the film and is then reflected by the lower surface. The light that enters the film is bent and deflected from its path by the film’s greater density, or refractive index. Assuming that the thin film on F. laciniata is of a greater density than air, it will slow down the incoming light waves. The slowed down light, having smaller waves, is reflected off the bottom surface of the thin layer and returns to the upper surface where it eventually joins the light that was reflected off the upper surface. At this point, the light that took the extra trip is out of phase.

Now, the question of what color we will see is contingent on the thickness of the film and the angle of incidence of the incident light. If the phase difference equals a multiple of one full wavelength, that particular wavelength, or color, will be reinforced when the light that went through the film rejoins the light that reflected off the upper surface. Reinforcement will be the greatest if the waves also have the same, or similar, amplitudes. Other wavelengths will be weakened or even eliminated (when crest meets trough). Thus we see only one color visible, in the case of F. laciniata, a blue-purple.

However, if the phase difference between the light rays are one and a half wavelengths, or any other possibility other than a multiple of one wavelength, they will neutralize each other and become invisible. Thus, some other color whose wavelengths coincide will appear.

It is hard to say whether constructive or destructive interference is happening in Fauchea laciniata. All that can be said is that the thin layer on the surface of the thalli of this algae are of a certain thickness and density to preferentially alter the wavelengths of incoming, refracted light towards the blue/purple wavelengths, somewhere between 370 and 450 nanometers. This is seen overlaid on the deep red color caused by pigments in the thalli.”