The Case for a Pink Mountain ER

From: THE LOG    FRIENDS OF ECOLOGICAL RESERVES NEWSLETTER    SPRING/SUMMER 2011

By Ron Long
Pink Mountain is located 180 kilometers north of Fort St. John in northern British Columbia. The mountain is only 1700 meters at its highest point but is so far north that the summit is uniformly arc- tic/alpine tundra habitat.
Pink Mountain and its imme- diate surroundings comprise one of the most biodiverse areas in BC. It supports large popula- tions of pine martin, moose, black bear, elk, whitetail deer, mountain caribou and Stone’s sheep. The bird population includes Golden Eagles, Horned Larks, Sandhill Cranes, Blue Grouse and Rock Ptarmigan.
Ptarmigan are the only birds to over-winter on the summit. They are entirely dependent on alpine willows for their survival.
Pink Mountain is internation- ally known in the butterfly community for its concentration of rare Arctic butterfly species.
Most significant is the plant assembly. The northern location and tundra habitat bring together a unique and rich community of rare and rarely seen arctic/alpine plants. A comparison with peaks of similar height    to the west shows that Pink Mountain is entirely different from other mountains. Nearby peaks have almost no flowering plants and support primarily a thick turf of grass.
The foothills and mountains in the vicinity of Pink Mountain are covered by Cretaceous rocks, which mainly consist of sandstone and shale.
At Pink Mountain erosion has removed the Cretaceous rock and exposed the underlying limestone at the south end of the summit. This means that the soil derived from these lime- stone rocks has a considerable amount of Mg, Ca, P and salts, which other mountains don’t have. It is likely that the presence of these nutrients is responsible for the unique flora found on Pink Mountain.
Because of its unique geology, Pink Mountain is significantly different from any other mountain in the North Peace district.
The Muskwa-Kechika management Area gives some pro- tection to a large area to the west of Pink Mountain. It has been suggested that this management area may contain other sites that duplicate Pink Mountain. However, the entire Muskwa- Kechika is overlain by the young Cretaceous rock with limestone only exposed on the highest peaks where no soil is formed. It is almost certain that the Muskwa-Kechika does not have a Pink Mountain equivalent. 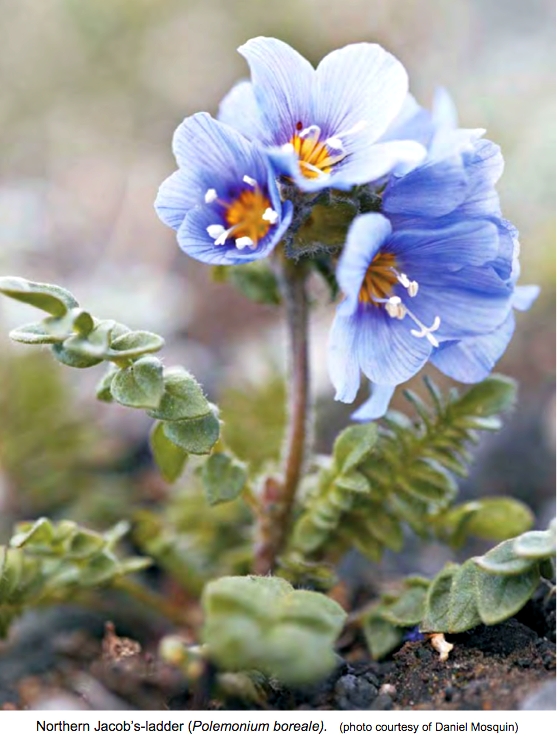 To-date one red-listed and no less than ten blue-listed plant species have been collected on the summit of Pink Mountain. Red-listed plants are in danger of extinction in BC and blue listed plants are severely threat- ened in BC.
Pink Mountain Red- and Blue-listed Plants
Alopecurus alpinus – Red (Known in BC only from Pink Mountain)
Luzula rufescens – Blue
Luzula confusa -Blue
Festuca minutiflora – Blue
Carex rupestris    –    Blue
Polemonium boreale –    Blue
Silene involucrata ssp. involucrate –Blue
Oxytropis jordalii ssp. davisii    – Blue
Ranunculus pedatifidus ssp. affinis – Blue
Minuartia elegans – Blue
Androsace chamaejasme – Blue
This large number of threatened species has been recorded even though there has never been a complete and thorough inventory of species on Pink Mountain. It is expected that further study will reveal additional red- and blue-listed plant and butterfly species.
The Conservation Data Centre confirms that there is not another site north of Vancouver that supports so many red and blue listed plants. The rare and rarely seen plants are concentrated on the south end of the Pink Mountain summit. The roadsides on this portion of the summit are now critical habitat for three of the blue-listed species and many of the rarely seen species.
There is a Provincial park on Pink Mountain established to protect fossil beds and rare butterflies.
Pink Mountain Provincial Park is located on the steep west side of the mountain. The area of the park is so steep that continuous rock and soil movement makes small plant growth impossible.

No plants = no butterflies. Pink Mountain Provincial Park provides no protection for the plants.
Current commercial activity on the summit consists of several communication antennas and two gas wells. Several antennas are powered by diesel and propane generators. These generators create sound pollution that is audible at every point on the summit and the heavy trucks carrying fuel are destroying the road in places. The gas wells have resulted in the bull- dozing of several hectares of fragile alpine habitat and tran mission lines remain to be built. There is survey evidence to indicate additional wells are planned. The gas wells are located to the north of the main plant concentrations.
The entire summit is now threatened by a plan to place forty wind turbines on the mountain. This plan has the potential to completely destroy the biodiversity of the Pink Mountain summit. Because of its unique and rich biodiversity a portion of the Pink Mountain summit needs to be protected.
We propose preserving an area extending in the south from the last switchback on the existing road, which is at 1500 meters and corresponds to the tree line, to a point just short of the first gas well to the north.
This preserve encloses most of the plants of interest, covers only about one third of the summit and leaves the entire northern two thirds of the summit for gas and wind development.

The existing road on the summit must be preserved as is. A wind development on Pink Mountain would require a substantial road to accommodate the thousands of construction vehicles that would be used. The Bear Mountain wind farm, located south of Fort St John, required 17,000 truck- loads of concrete alone. The existing road on Pink Mountain would need a total rebuild and this would destroy a substantial number of important plants.
We propose that a new road be built from the base to the north end of Pink Mountain summit. This is unlikely to cost very much more than the rebuilding of the present road and would protect the south end of the mountain.
The present road would be permanently closed at the base of the mountain.