An Update by Mike Fenger

Background
There is a process lead by the Canadian Wildlife Service (CWS) of Environment Canada to establish a Marine Wildlife Protected Area (MWA) for the Scott Islands. This is part of the Federal Government’s Health of the Oceans Initiative.

From: THE LOG    FRIENDS OF ECOLOGICAL RESERVES NEWSLETTER
AUTUMN/WINTER 2010 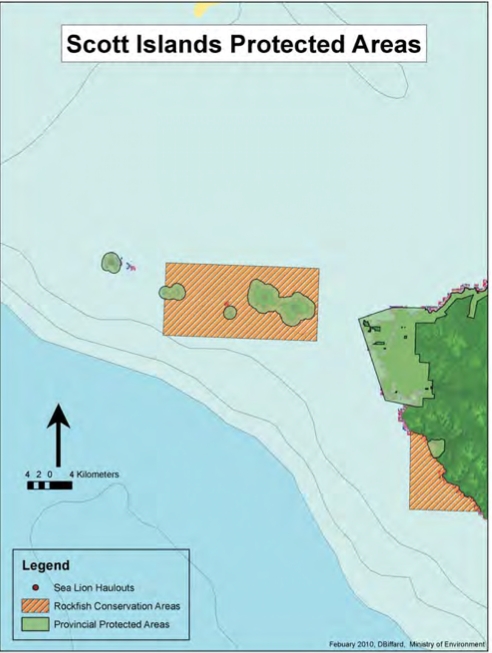 The Scott Islands refers to a group of five islands situated northwest of Vancouver Island offshore from Cape Scott. Biologically they are significant and critical for nesting of sea birds. Three of the islands and surrounding foreshore were protected as Ecological Reserves in 1971; Sartine Island ER 11, Beresford Island ER 12, and Anne Vallee ER 13 for Triangle Island. The management plans and purpose statements for these ERs are posted at http://www.env.gov.bc.ca/bcpar ks/eco_reserve/ecoresrv/ecoresr v.html. Lanz and Cox Islands were designated as Parks in 1995 and have a wilderness recreational focus.
The protection of the marine component under the Federal legislation will integrate management and conservation activities between Federal and Provincial levels of government and is a welcome and needed addition to provincial designations.
Public consultation and advisory sessions were lead by the Canadian Wildlife Service (CWS) in 2004 but did not conclude in a Marine Wildlife Area designation.

The process has restarted and we hope for a successful conclusion. It was decided after an NGO meeting hosted by CWS and facilitated by Bob Peart that Living Oceans (Kim Wright) and Canadian Parks and Wilderness Society (CPAWS) Sabine Jessen would represent the environmental community and report on progress and provide opportunity for involvement.
There are 30 established ERs that have a marine component. Therefore, Friends of Ecological Reserves has an interest in extending protection to the ocean environment. It is hoped that the Scott Island MWA is a starting point for a comprehensive network of Marine Protected Areas (MPAs) with inclusion of the water column as part of the terrestrial ecosystem.
See articles in the Autumn/Winter issue of the Friends of Ecological Reserves newsletter the LOG on expectations and experiences with the DFO-led marine protected area process underway for Race Rocks MPA.
Thanks goes to Living Oceans Society Kim Wright www.livingoceans.org and information supplied by Karin Bodtker and Jake Etzkorn for this up date.
First Advisory Group meeting in September
A draft framework for Marine Protected areas was developed to guide a number of planning sessions with key experts, stakeholder and relevant authorities to generate and review spatial plans and management objectives for the proposed MWA. This framework includes guiding principles mutual respect, constructive dialogue, precautionary approach and best available information. Environment Canada will rely on currently available spatial analysis tools such as MARXAN. Draft MWA goals proposed were: 1) conserve natural habitats, ecological processes and marine resources that support seabird populations; 2) minimize adverse effects on seabirds from controllable marine activities; 3) support relevant research and monitoring and 4) establish
long term cooperative management. These goals will be translated into activities with measurable outcomes in the management plan.
The first planning session was held in November and focused on science and traditional knowledge of ecosystems values/function. Participants from academia and government and first nations were asked to clarify what is known about sea bird biology, ocean currents, other marine species and ecosystems, traditional knowledge, ocean floor topography/sonar and spatial
analysis. Subsequent sessions planned before March 2011 are: 1)cultural values and management objectives; 2) management objectives for MWA and current marine activities; and 3) commercial fishing. Other sessions planned for but not scheduled are: 1) research and monitoring; 2) surveillance; and 3) enforcement and cooperative management. We look forward to hearing how these session are going and are pleased to have the opportunity to provide input into the process through Kim and Sabine.