Objectives Pale evening primrose (Oenothera pallida) is listed as S1 (Red-listed) in British Columbia (CDC 2010). It is a priority 2 under goal 3 (Maintain the diversity of native species and ecosystems) of the BC Conservation Framework (2010). The Framework recommends inventory to confirm status rank. 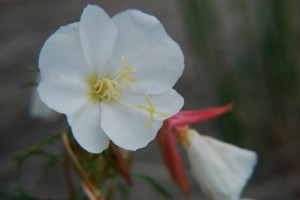 Abstract The 2010 inventory did not monitor the Pemberton site. Extensive plant surveying has been done in the south Okanagan Valley in potentially suitable habitats during the blooming season, however few occurrences have been recorded. The current survey from 2010 identified or confirmed at least 4 extant locations with approximately 4419 individuals found between Osoyoos and Penticton, with most (95%) individuals in the Osoyoos Lake area. They occurred in the BGxh1 and PPxh1 Biogeoclimatic subzone variants below 630m ASL. Additional data from the Conservation Data Centre and Royal BC Museum suggest another 3 to 4 sites that have not been confirmed recently (last 15 to 60 years). It is likely that other patches of pale evening-primrose occur on the east side of the Okanagan Valley between Osoyoos and Oliver, which has had less survey effort and encompasses private land with limited access. Most occupied sites for this species are in the Antelope-brush – Needle and thread grass ecosystem. Close to 70% of the suitable habitat in Antelope-brush has been destroyed by agriculture and urban development (Lea 2008), and development of the remaining potential habitat is ongoing. Observed, potential threats include: road maintenance activities, soil removal, ATV use, invasive species establishment and residential development. The largest known site is protected within the South Okanagan Wildlife Management Area and the Hayne’s Lease Ecological Reserve.