ABSTRACT
We estimated carrying capacity for sea otters (Enhydra lutris) in the coastal waters of British Columbia, Canada, by characterizing habitat according to the complexity of nearshore intertidal and sub-tidal contours. We modeled the total area of complex habitat on the west coast of Vancouver Island by first calculating the complexity of the Checleset Bay–Kyuquot Sound (CB–KS) region, where sea otters have been at equilibrium since the mid-1990s. We then identified similarly complex areas on the west coast of Vancouver Island (WCVI model), and adapted the model to identify areas of similar complexity along the entire British Columbia coast (BC model). Using survey data from the CB–KS region, we calculated otter densities for the habitat predicted by the 2 models. The density estimates for CB–KS were 3.93 otters/km 2 and 2.53 otters/km 2 for the WCVI and BC models, respectively, and the resulting 2 estimates of west coast of Vancouver Island complex habitat carrying capacity were not significantly different (WCVI model: 5,123, 95 %CI¼3,337–7,104; BC model: 4,883, 95 % CI ¼3,223–6,832).
The BC model identified the region presently occupied by otters on the central British Columbia coast, but the amount of coast-wide habitat it predicted (5,862 km 2 ) was relatively small, and the associated carrying capacity estimate (14,831, 95 %CI¼9,790–20,751) was low compared to historical accounts. We suggest that our model captured a type of high-quality or optimum habitat prevalent on the west coast of Vancouver Island, typified by the CB–KS region, and that suitable sea otter habitat elsewhere on the coast must include other habitat characteristics. We therefore calculated a linear, coast-wide carrying capacity of 52,459 sea otters (95%CI¼34,264–73,489)—a more realistic upper limit to sea otters in British Columbia. Our carrying capacity estimates are helping set population recovery targets for sea otters in Canada, and our habitat predictions represent a first step in Critical Habitat identification. This habitat-based approach to estimating carrying capacity is likely suitable for other nonmigratory, density-dependent species. 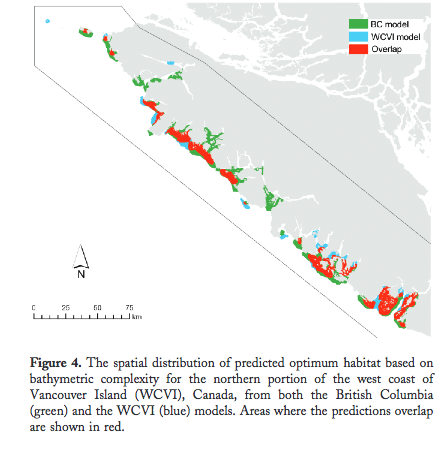