From: THE LOG    FRIENDS OF ECOLOGICAL RESERVES NEWSLETTER    SPRING 2008 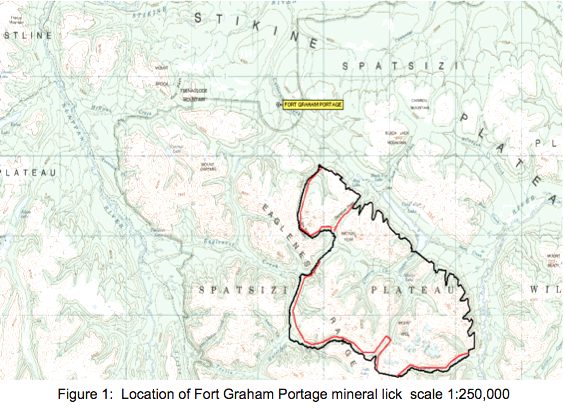 The objective of the Gladys Lake ER Subcommittee and field review team was to make recommendations to the regional manager to resolve issues surrounding historic and current use of trails, camps and grazing areas within the Gladys Lake ER. The boundary adjustments recom- mended by the subcommittee and field review team were legislated on March 29, 2006 (OIC 726/81). Furthermore, the subcommittee also recom- mended investigating a unique mineral lick as a potential ecologi- cal reserve.
Fort Graham Portage mineral lick, which was identified by the local guide outfitter during the Gladys Lake ER field review in 2005, is unique in its appearance and location. The mineral lick is located several kilometres from typical sheep and mountain goat habitat, in a low elevation area near Cullivan Creek. 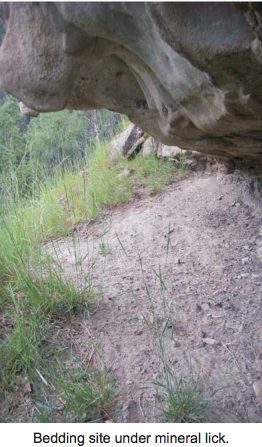 Spatsizi Wilderness Park. Cullivan Creek drains northward into the Stikine River and is several kilo- metres northwest of the Gladys Lake ER. Once on the ground, the team followed a trail through spruce forest to the top of a ridge. At this point the team left the trail and descended a grassy slope to the mineral lick which was part of a distinctive sandstone/limestone bluff.
OBSERVATIONS: 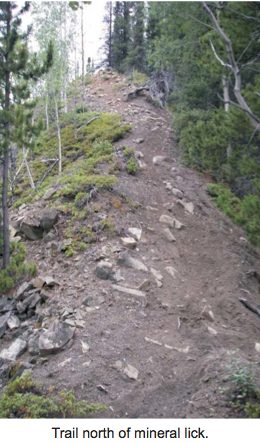 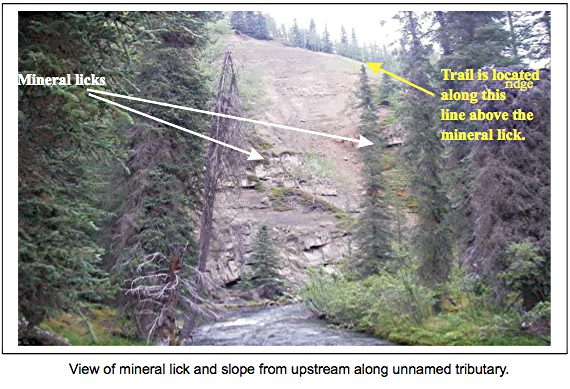 2. The purpose of this Act is to reserve Crown land for ecological purposes, including the following areas:
(a) areas suitable for scientific research and educational purposes associated with studies in productivity and other aspects of the natural environment;
(b) areas that are representative examples of natural ecosystems in British Columbia;
(c) areas that serve as examples of ecosystems that have been modified by human beings and offer an opportunity to study the recovery of the natural ecosystem from modification;
(d) areas where rare or endangered native plants and animals in their natural
habitat may be preserved;
(e) areas that contain unique and rare examples of botanical, zoological or
geological phenomena.
Based on section 2, sub-section (e) of the Ecological Reserves Act, the field review team concludes that the Fort Graham Portage does fit the criteria.
NOTE: Parks & Protected Areas, inclusive of Ecological Reserves, do not infringe on First Nation aboriginal rights unless there are safety or conservation concerns.
In total, 160ha including the mineral lick, connecting wildlife trails, and upstream canyon habitat, should be designated as an ecological reserve as defined under the Ecological Reserves Act.

RECOMMENDATIONS
All recommendations made in this report are made with full consideration of the guiding principles as set out by the Gladys Lake Ecological Reserve Sub- committee and the Fort Graham Portage Field Review Team Terms of Reference (Appendix 1).

1. Organize field review team which should consist of:

a) BC Parks (must be familiar with use of GPS)

2. Field truth proposed boundaries along the existing trail during 2008 season (see Figure 3).    Boundaries must not affect use of camps, trails and grazing areas.

a) Make adjustments to proposed boundary to include 15m buffer along trail north of mineral lick.

3.    Establish Fort Graham Portage as defined under the Ecological Reserves Act for the purpose of:

a) Protecting a unique and rare geological and zoological feature used by wildlife mountain ungulates as a mineral lick.

b)  Protecting escape terrain associated with the use of this mineral lick;
c) In all encompassing a total area of 160 ha.