From: THE LOG    FRIENDS OF ECOLOGICAL RESERVES NEWSLETTER    AUTUMN 2007

By Mike Fenger and Mary Rannie

Background
Afield visit to this potentially new Ecological Reserve at the Fort Graham Portage was mandated through a recommendation made previously to the Regional Manager by the team that reviewed the boundaries of Gladys Lake Ecological Reserve (2005). In addition to recommending new boundaries which reduced the size of Gladys Lake ER, the field team recommended another visit to the mineral lick. Only through the Collingwoods’ knowledge of wildlife use was this lick included in the previous field visit.
A field visit was scheduled in 2006 but was postponed when FER were not able to attend. We are grateful for Parks inclusion and thankful for our ability to participate this year when Mary Rannie, a member of the FER board, represented FER on this field trip. 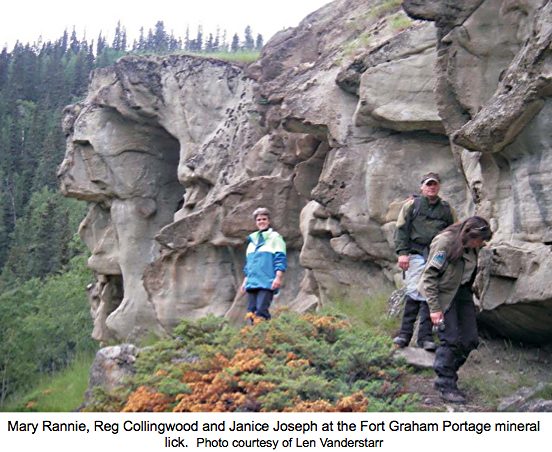 Mary Rannie’s Field Observations
The team was flown by helicopter from Tatogga Lake Resort on the Stewart-Cassiar highway east to a gravel bar on Cullivan Creek in Spatsizi Wilderness Parks. Cullivan Creek drains northward into the Stikine River and is several kilometers northwest of the Gladys Lake ER. We climbed for a few minutes through spruce forest on a horse trail used by the Collingwoods. At the top of a ridge we left the trail, descending a grassy slope to the mineral lick which was part of a distinctive sandstone/ limestone bluff. We examined the 100 meter long lick, much of which was an overhang which had smoothly eroded contours. We found sheep and goat hair on nearby twigs, as well as rubbing and bedding sites. We also found a form of scat (clay-like ‘rocks’) indicating that sheep were licking and eating the sandy silt. There were trails leading down to the creek below. 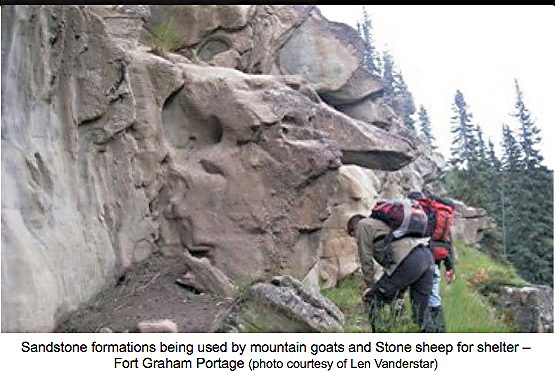 After looking at the site on the ground, we flew south following two distinct game
trails along the mineral lick creek’s canyon. They were clearly visible for 3-5 kilometers until the canyon ended. Sheep and goats appear to use this escape terrain above the unnamed creek to access the lick which is located between the 3300 to 3700 foot elevation range, well below timberline, and 3 to 5 kilometers from the nearby mountains. Inclusion of this escape terrain within a proposed ER appears logical.
The horse trail is located at the top of the slope immediately above the mineral lick. The proposed ER boundary would be to the south of this trail. The proposed ER would include the lick and the escape terrain to the south, essentially a long feature with the boundary defined by the mineral lick and escape terrain. Once the wild mountain ungulates leave the escape terrain for higher alpine areas the trails are no longer distinct. It was concluded that the sheep and goats dispersed through the forest to alpine habitat.
Discussion
As a member of the field team, FER sensed there was agreement on the values within this area as suited to ER status and a willingness of the other team members to support a change from Park to ER in an area limited to the feature.
The field visit was specific to confirming the values of this feature and based on our field observations this areas is consistent with section e) of the Ecological Reserves Act (see URL http://www.qp.gov.bc. ca/statreg/list_statreg_e.htm) which states:
(e) areas that contain unique and rare examples of botanical, zoological or geological phenomena.
It may also be possible that the plants in the area may fit under Section f) which states: (d) areas where rare or endangered native plants and animals in their natural habitat may be preserved; 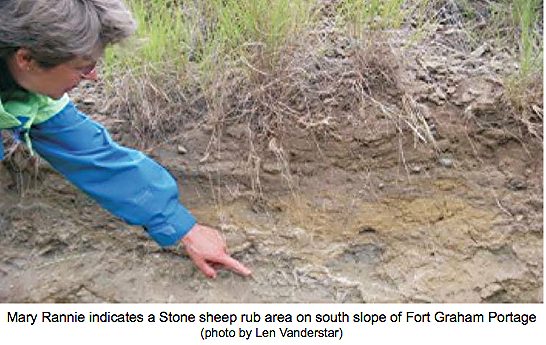 A vegetation inventory would be needed to confirm the presence or absence of rare native plants.
Based on section e) of the Ecological Reserves Act, FER  concludes that the Fort Graham Portage does fit the criteria and does warrant ER designation.  Inclusion of this mineral lick and escape terrain also supports the purpose for which Gladys Lake ER was established which is:
“Gladys Lake Ecological Reserve was established to provide an alpine-subalpine study area containing unharvested large mammal populations, and to protect Spruce-Willow-Birch and Alpine Tundra ecosystems” (See URL http://www.env.gov. bc.ca/bcparks/eco_reserve/glad ys_er.html#purpose )
Recommendations
1.    That a new Ecological Reserve named Fort Graham Portage be established for the purposes of protecting a unique and rare geological and zoological feature used by a wildlife mountain ungulate as a mineral lick.

2.    That the feature and the escape terrain in the Spruce Willow Birch Biogeoclimatic zone be bounded by the horse trail to the north and the escape terrain that is at the break of slope for a few kilometers above the unnamed creek flowing into Cullivan Creek to the south.
3.    That the size of the ER is determined through GPS or some other suitably accurate means to define boundaries. It is estimated that the size would be approximately 250 ha.
4.    That soil samples for the mineral lick be taken and analyzed and that vegetation is inventoried using standard Vegetation Resources Inventory as part of the baseline for this new ER.
5.    That ER monitoring include provisions for recording observations of wildlife use of this ER, and over time, the tracking of species that use this mineral lick to establish their home range size and the importance of this site within the larger landscape context be undertaken.
6.    That this new ER be established within the next two years and no later than January 2010.
Acknowledgements
Thanks to MOE staff Janice Joseph and Len Vanderstar for logistics that made this field trip a reality. Thanks to Jim Reed, helicopter pilot, for the safe passage and thanks to the Collingwoods for taking part and putting this forward. Thanks to Mary Rannie for attending on behalf of FER.