Executive Summary
Pope & Talbot Ltd. is committed to Sustainable Forest Management Planning (SFMP) on its management
units in British Columbia. An important component of their SFMP is the management of biodiversity values, including maintaining a proportion of representative ecosystems in an unmanaged state. 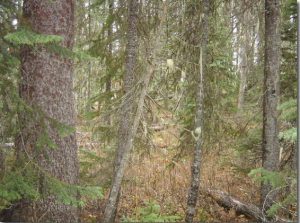 Previous analyses have grouped and mapped site series “clusters” of unique ecosystems on the Boundary
TSA, and a method was developed to estimate the ecological risk associated with the relative distribution
and abundance of each ecosystem in the unmanaged land base. More recently, an analysis was conducted
to identify potential ecosystem reserve areas which optimize the full suite of SFMP values. The purpose
of this project was to sample within these potential reserve areas to:
•assess whether ecosystems were consistent with the predictive ecosystem map that was used to identify
potential reserves;
•assess old growth attributes according to ILMB’s assessment methods; and,
•characterize coarse woody debris volumes and snag attributes.
Field data were collected at 55 plots on the Boundary TSA, distributed among 6 biogeoclimatic subzone
variants. Most of the potential ecosystem reserves visited during the study had attributes consistent with
old forest; however, they could not be considered unmanaged and were often associated with structural
attributes consistent with younger stands.
The results of this study suggest that the field investigations were largely consistent with expectations of
strategic-level analyses. This increases confidence in the maps and tools that have been developed to generate the proposed system of ecosystem reserves, although additional ground sampling might be necessary. As a result, the final selection of ecosystem reserves can focus on the required decisions related to
trade-offs among values, including the desirability of old attributes versus better ecosystem representation.

BC PREPARED FOR Pope & Talbot Ltd.
Midway, BC 31