Provincial Marine Protected Areas in BC– 2007

British Columbia’s Pacific coast is one of the world’s most biologically diverse and productive temperate marine environments. Island archipelagos, deep fjords, shallow mudflats, estuaries, kelp and eel grass beds, strong tidal currents and massive upwellings all contribute to an abundant and diverse expression of marine biodiversity. The northeast Pacific also ranks among the world’s best for coastal cruising, scuba diving, sea kayaking, sport fishing and whale watching. Communities have been sustained on the coast for thousands of years and have developed a close relationship with the land and sea, creating a rich cultural history.

See the complete BC PARKS PDF at: parks_2007_marine_protected_areas_bc

B.C. has been the most active of all Canadian provinces in the establishment of MPAs. The first marine waters were protected in 1911 as part of the establishment of the province’s first provincial park, Strathcona. The first marine parks at Montague Harbour and Rebecca Spit were created in 1957, primarily to provide safe anchorages and scenic shorelines for coastal cruisers. In 1961, Mitlenatch Island and the surrounding seafloor were designated as the first provincial park dedicated to the conservation of marine flora, fauna and habitat. Starting in the 1970s, MPAs began to be recognized as tools for marine ecosystem conservation. B.C. responded with the creation of new and larger areas such as Desolation Sound Provincial Park and Checleset Bay Ecological Reserve. The provincial government, through the Ministry of Environment, currently protects 149 marine areas in a system that stretches along the entire coast (as of August 2007). 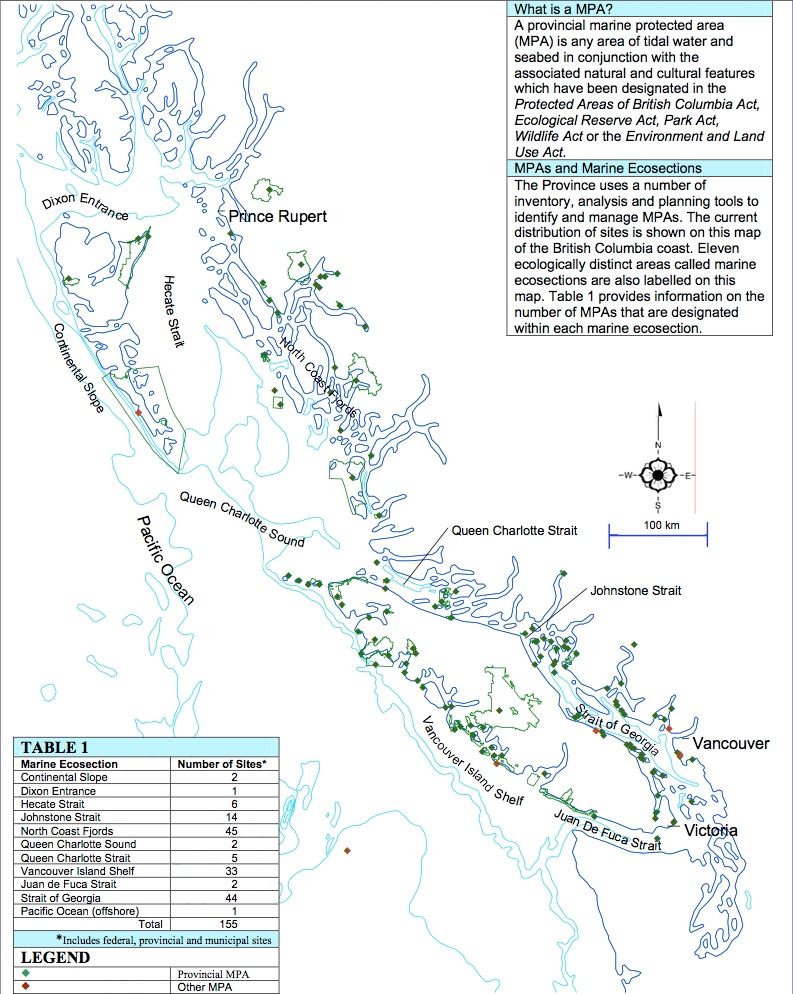