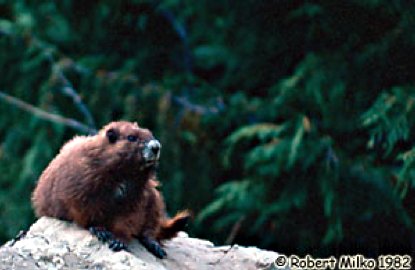 The Vancouver Island marmot (Marmota vancouverensis) is a colonial ground squirrel related to the hoary marmot M. caligata and Olympic marmot M. Olympus. It is notable for its chocolate brown fur, unique vocalizations, atypical skull characteristics, and highly social nature.
Distribution
The Vancouver Island marmot is endemic to Vancouver Island, British Columbia, Canada.
Habitat
The natural habitat of Vancouver Island marmots consists of sub-alpine meadows, usually at 900-1500 metres above sea level. Such meadows are believed to have been created and maintained by avalanches, snow-creep or fire, or a combination of processes. Patches of natural habitat on Vancouver Island tend to be both smaller and located father apart than those occupied by marmots in the B.C. mainland or the Olympic peninsula. Vancouver Island marmots also use man-made habitats. Numerous colonization events occurred in habitats created by clearcut logging of high elevation forests, mining, and ski-run developments.
Biology
M. vancouverensis is fossorial, herbivorous and hibernates, generally from early October through late April. Females may breed at age two, but most do not breed until age 3 or 4, producing litters of 3-4 pups every two years on average. Both sexes disperse, typically at age two. The maximum observed age is 10 years in the wild, 14 years in captivity.

iv Population sizes and trends
Vancouver Island marmots apparently suffered a severe range contraction over the last several decades, although records are insufficient to elucidate when or why this occurred. Annual population surveys since 1979 indicate that marmot numbers at least doubled during the 1980s, with most of this increase occurring in new habitats created by logging of old-growth forests. A minimum of 235 marmots were counted in 1984, but it is likely that the population numbered 300-350 at this time, with most of it in man- made habitats. The population declined precipitously during the 1990s, with only ~70 individuals remaining in the wild by 1997. In 2007 there were about 50 wild-born marmots in the wild, plus a few dozen released marmots (not included in this assessment) and over 100 captive marmots, which are also not included in this assessment.
Limiting factors and threats
The natural habitat of Vancouver Island marmots is limited. Sub-alpine meadows are small (1-10 ha) and occur infrequently in the otherwise forested landscape. Recent pollen analysis suggests that marmot habitats were much more extensive several thousand years ago. Palaeontological and archaeological records of marmots are found well outside of their historical extent of occurrence.
Habitat created by logging is only temporary as forest regeneration makes conditions unsuitable for marmots. All 10 colonies found in clearcuts during the 1980s and 1990s became extinct by 2000. The median colony longevity in clearcuts was 10 years (range = 5-19 years), which is about 2-3 marmot generations.
The major current threat to Vancouver Island marmots is predation. At least 80% of marmot mortality since 1992 was attributable to predation, largely by wolves (Canis lupis), cougars (Puma concolor) and golden eagles (Aquila chrysaetos). Annual survival rates have declined since the 1980s, losses at individual colonies were often dramatic within single years, and colony-specific survival rates were spatially correlated.
Given the small size of the current wild population, other threats include loss of genetic variation, stochastic demographic or weather effects, and inability to find a mate.
Special significance of the species
Marmota vancouverensis is one of only five endemic species of mammal in Canada.