September 28, 2006
Dear Friends,
We spent our field season divided between Bamfield Marine Sciences Centre and the community of Kyuquot in Checleset Bay. In our ongoing research we have been using the red turban snail (Astraea gibberosa) as a model species to study how sea otter predation affects prey populations.

As I have reported in previous letters, sea otters are known to be size-specific predators. Sea otters lack blubber and stay warm by heating air trapped in their thick fur. Producing this heat requires that otters consume up to 30% of their body weight in food each day. Such a large appetite means sea otters cannot afford to waste energy; any prey item that “costs” more to catch than it is “worth” is not taken. As a result otters tend to select large individuals from a prey population. In the case of red turban snails they appear to remove individuals > 40mm in diameter and snail populations in areas with otters have few large snails whereas in areas without otters ~30% of the snail population is made up of individuals > 40mm.

In fact in areas without sea otters, we think red turban snails are most likely to get eaten when they are small – being preyed upon by a variety of invertebrate predators, especially crabs. We compared the source of mortality in snails in areas with (Checleset Bay) and without (Barkley Sound) sea otters by collecting broken snail shells from each area. In areas without otters 89 % of the cracked snails we collected were broken parallel to the base of the shell (Figure1A), which is how crabs crack open snails. In areas with sea otters 90% of the cracked snails were broken perpendicular to the base (Figure 1B), which is how we believe sea otters crunch open snails. In areas with otters, snails broken parallel to the base (by crabs) are rare, perhaps because most large crabs have been eaten by otters. 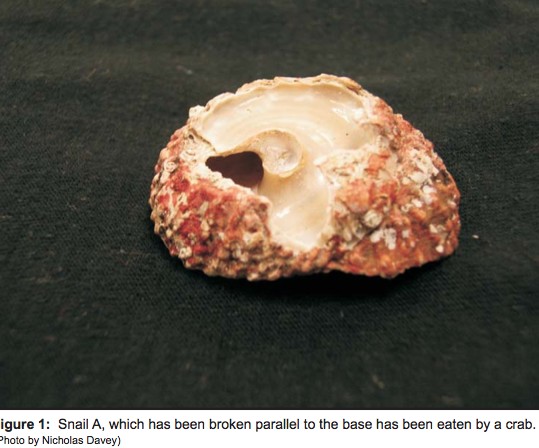 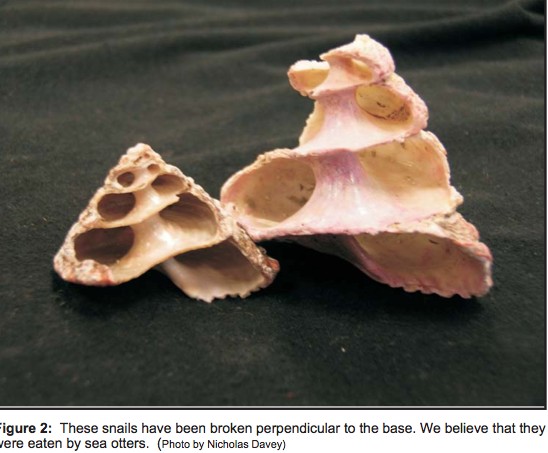 Two Malaspina University-College students, Nicholas Davey and Arin Routledge-Yeomans recently conducted lab experiments examining crab predation on turban snails. Their results suggest that red rock crabs may avoid eating large snails which are hard to open and select medium to small snails which are easy to crack. To make a long story short; crabs like little snails and sea otters like big snails, but why, you ask, should this matter?

These results suggest that changing predators could affect the reproductive strategy of prey populations. In animals that broadcast spawn (the squirt and pray method of reproducing) reproductive success increases with body size, because large individuals produce more eggs or sperm, and potentially more offspring. Consequently, in areas where predators such as crabs are common, red turban snails should produce more offspring if they put energy into growth when they are small (and vulnerable) and reproduce when they are large (and most fecund). However, in areas with sea otters, only those snails that reproduce when they are small (<40mm) will be successful because large individuals (>40mm) get eaten. If reproductive size is an inherited trait, different types of predation pressure may result in different reproductive strategies. Since red turban snails, much like abalone, have a larval stage that does not disperse very far, it is possible that these strategies could appear in snail populations quite quickly. Furthermore, reproductive strategies may have changed when sea otters were extirpated from BC waters.

In the meantime the Canadian sea otter population is growing. Our annual counts indicate that the sea otter population in and around Checleset Bay Ecological Reserve has been stable since about 1995; having reached a carrying capacity that is probably determined by prey abundance. Overall however, the BC otter population continues to expand its range and increase in size. Population surveys conducted in collaboration with Linda Nichol at the Department of Fisheries and Oceans put the BC sea otter at about 3200 animals (Linda’s report is available at http://www.dfo-mpo.gc.ca/csas/). On Vancouver Island sea otters range from Vargas Island north to Hope Island and on the central coast from Milbanke Sound to the Spider Islands. This continued growth and range extent will hopefully make the BC sea otter population less vulnerable to large-scale environmental disasters such as oil spills.

Once again I would like to thank the Friends for its support of sea otter research in BC.  Long-term support for ecological studies of our ever-changing world is essential but very difficult to obtain. Without support from the Friends this ongoing work would not be possible