The Klanawa reserve runs along the river for about 2 km and is approximately 500 m wide with the river running through the center. This area includes part of the alluvial floodplain on the northwest and southeast sides of the Klanawa River and adjacent slopes to the southeast. Only the lower parts of the floodplain experience frequent flooding.

From BC Parks see PDF file:klanawa

This image of redwood sorrel below was kindly provided by  Dave Lines from his Flickr site: 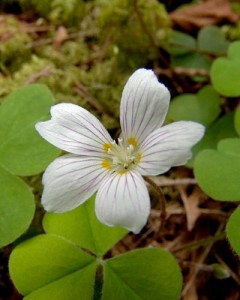 The main feature of the reserve is the Sitka spruce – Salmonberry – sword fern- redwood sorrel community on the highbench to the northwest of the Klanawa River. While redwood sorrel is now known from several other locations in the province, none of these present similar stands. (Similar forests are found in Washington state, however.) Western hemlock, western redcedar, red alder and bigleaf maple are less frequent trees in this community and red huckleberry, oval-leaved blueberry and stink currant occur scattered. Characteristic plants of the herb layer are false bugbane, false lily-of-the-valley, foam flower, trillium, oregon fairybells, star-flowered solomon’s seal , and rosy twistedstalk.
Other forest communities, primarily on the east side of the river, are western redcedar, western hemlock ,deer fern and western redcedar,salmonberry,lady fern / skunk cabbage on the flat terrain and various combinations of western redcedar, western hemlock and amabilis fir on the slopes. The former contain many other floodplain and wet-site species, while the latter contain more ericaceous shrubs, sword fern and deer fern..
Marbled Murrelet nesting habitat is present in the old-growth, moss- covered spruce hemlock stands.

Cultural:    The diversity of native plants in this area suggests the reserve may have been important for the gathering of medicinal plants by First Nations.

Climate Change:
The outstanding feature of this reserve is the rare redwood sorrel community along the river. It is unknown how long the climate envelop will be appropriate to maintaining this ecosystem. Hydrologic and temperature changes could affect the soil moisture content which would, in turn, affect the ability of this community to thrive.

Recreation: There is access via the gravel roads, but the level of use is unknown.

T r a n s p o r t a t i o n c o r r i d o r s:Gravel roads parallel both boundaries that follow the course of the river. One is high above the river, but the other is very close to the floodplain.

Continued Harvest:Very little forest cover remains in adjoining timber stands. Wind throw is causing significant edge affect (blow down) which reaches in to the ER. Efforts began in 2008 to secure some of these stands as OGMA’s and WMA’s. This reserve is less than the recommended 140 ha recommended in the Purpose Statement.

Monitor: The ease of  access via the roads  make this reserve amenable to mo oitoring.It represents riparian area that could be used to monitor changes in the absence of human disturbance.
SIGNIFICANT SPECIES…..BC List Status…………………..COSEWIC
redwood sorrel . (Oxalis oregana) ………………..Blue (2006)…………………….

The image of redwood sorrel above was kindly provided by  Dave Lines form his Flickr site: