From THE LOG • FRIENDS OF ECOLOGICAL RESERVES NEWSLETTER • AUTUMN 2005

The late Cedric and Gertie Myers, residents of Honeymoon Bay, well- known naturalists and members of the Cowichan Valley Naturalists were instrumental among others in having the Sutton Creek area of Honeymoon Bay (9 km west of Lake Cowichan on Vancouver Island) protected for its outstanding populations of Erythronium revolutum. It is a pretty little area
of 7.5 hectares with Sutton Creek meandering on one border. There are beautiful open glades of Big leaf maple, forested areas, and a beautiful spring flower show of Erythronium and many other flowers, including some blue and yellow-listed ones. It is located at the edge of the rainforest and rain shadow forest and protects significant species from both zones.

“The community organized, fundraised and replaced the flower identification sign, which was of sentimental value to residents, having been made by a well-loved local woodsman and artist Vincent Allan.”

Western Forest Products donated the land in 1983 to the BC Second Century Fund, now called Nature Trust. In 1984 it was leased to the Province as an Ecological Reserve for 100 years. Leon Pavlick did a botanical inventory in 1984.
I became Warden in Feb. 2003 when asked by BC Parks. There had not been a Warden in some time. 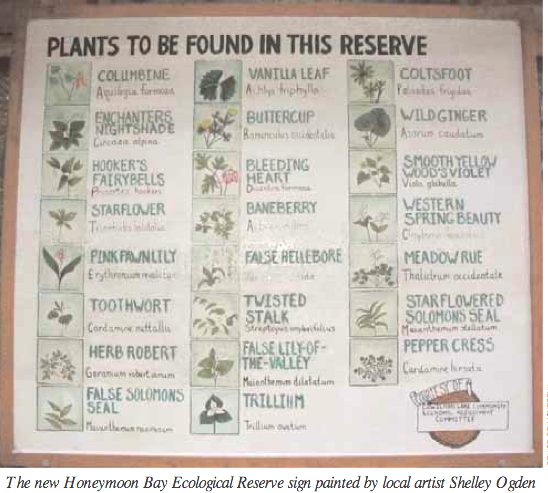 Increasing levels of garbage dumping led to the closure of the parking lot (in the ER) in the spring of 2003. The crowning insult was when a grow op was dumped there and a posting on the Friends of Ecoreserve website stated that a marijuana plant was in the debris.
Soon after the parking lot was closed Syd Watts, Warden for Mt. Tzouhalem ER and I went to the reserve to pick up winter deadfalls. On our return trip we stopped at the local gas station where to our great surprise there was a petition addressing management of the Reserve. After discussion it turned out that community had a variety of concerns including the fact that a historic flower identifi- cation sign had been taken down without their input. This had been done since the sign was damaged from being in the elements. There was also a great deal of upset about the parking lot being decommissioned. Merna Moffat, local community activist organized several meetings of the community and concerned parties. Don Closson, Cowichan Area Supervisor of BC Parks, the Friends of Ecological Reserves Board of Directors and the Cowichan Valley Naturalists were most helpful in facilitating and participating in several meetings with the community at large. I am very appreciative for their efforts since this led to a better understanding of issues to all parties concerned. It was agreed that all parties would be more proactive in communicating with each other. The community appointed a local resident to liaison with the Warden and the residents. Jim Fitzmaurice took this on and has done an excellent job and in addition has been most helpful with work parties at the Reserve.

Since the parking lot was decommissioned the garbage dump- ing has totally decreased, and there is some local acceptance that this was a good idea. The community organized, fundraised and replaced the flower identification sign, which was of sentimental value to residents, having been made by a well-loved local woodsman and artist Vincent Allan. Shelley Ogden, a local artist did a beautiful job of painting a new sign. Al Grass built a new kiosk. A ceremony was held to celebrate the new sign and the old sign, which had been repaired, was given a place of honour in the local community hall. By the time of the printing of this newsletter there will be another new educational sign in place funded by the Cowichan Valley Naturalists clearly stating what an ER is and including information on rules and history.

“It is a pretty little area of 7.5 hectares with Sutton Creek meandering on one border…It is located at the edge of the rainforest and rain shadow forest…”

We have had continued issues regarding directional signage to the Reserve and have had to compromise. There is some limited signage requested by the local government. It is a delicate balancing act having an Ecological Reserve next to a population centre. Another concern is the ecological integrity of the Reserve, which David Polster addresses in a separate article. ■