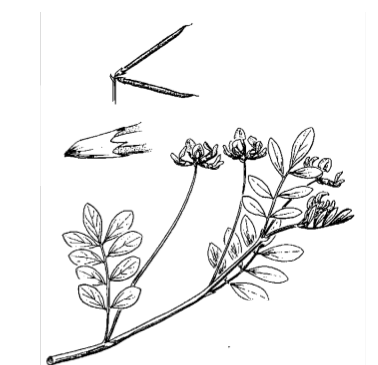 Lotus pinnatus (bog bird’s­foot trefoil) is a low­growing, multi­stemmed perennial herb with compound, pinnate leaves. The pea­like, yellow and cream­coloured flowers are borne at the end of a long stalk arising from the angle between the stem and leaf stalk. It is distinguished from other Lotus species by its perennial habit, papery stipules and yellow and white flowers. The umbel stalks are bractless or with a single membranous bract.

Lotus pinnatus is restricted to the west coast of North America and ranges from southeastern Vancouver Island, west of the Cascade Mountains and along the Columbia River Gorge from northwestern Washington to central California. This species also occurs sporadically eastward to Idaho.

British Columbia populations of Lotus pinnatus occur in moist open meadows along the margins of creeks, in wet ditches or in seepages, where underground water comes to the surface. In all cases, the soils are shallow (< 15 cm), over gently sloping sandstone or conglomerate bedrock with abundant moisture during the growing and blooming period. The most commonly associated species include Mimulus guttatus, Triteleia hyacinthina, Plectritis congestus, Plagiobothrys scouleri, Veronica beccabunga ssp. americana and Montia parvifolia.

Lotus pinnatus is a perennial plant that sends up several shoots each spring. The flowers emerge in June and mature by early July, before summer moisture deficits reduce the plant’s productivity. Capsules begin to dehisce by mid­July, dispersing mature seed until August. Flowers likely require cross­pollination to set viable seed, though pollinators have not yet been identified. The seeds have a hard seed coat that may delay the germination of some seed for several months or years.

There are seven known populations of Lotus pinnatus in Canada. Historic populations at two other sites could not be relocated and are likely extirpated. The total number of plants in Canada is between 1500 and 2000.

The viability of Lotus pinnatus in Canada is a concern due to the small number of known populations, habitat specificity, isolation from Washington populations, limited seed dispersal and the lack of protection on private land. Alterations to hydrology and erosion arising from intensive recreational use of primary habitat by off­road vehicles and invasive species are the main concerns for British Columbia populations.

Special significance of the species

Existing protection or other status designations

Provincially, Lotus pinnatus is red­listed (critically imperiled because of extreme rarity) as designated by the British Columbia Conservation Data Centre. Four occurrences for Lotus pinnatus are located on land that is privately owned; one site is protected within Ecological Reserve #142.(Woodley Range)