Primary Role: The primary role of Nimpkish River Ecological Reserve is to preserve an exceptional growing site that supports Canada’s tallest coastal Douglas-fir forest. The majority of the Douglas-firs are estimated to be about 360 years old, but a few large-diameter specimens belong to an older generation that could be 500 to 600 years old. The trees average 1.3 m in diameter and 66 m in height, with the occasional specimen reaching 2.0 to 2.4 m in diameter and 80 to 96 m in height. 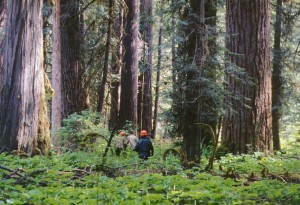 This picture is significant significant as it was taken by Hans Roemer when Dr. Krajina first visited what later became the Nimpkish Island Ecological Reserve. I took these photographs in June 1974 and they are colour slides. I attach a digital copy of one of the photographs showing Dr. Krajina, flanked by two foresters, making his way towards the largest Douglas-fir that then existed on this island (96 m tall, later lost to a Nimpkish River flood).

This unique, highly productive alluvial growing site on the west coast of Vancouver Island is at the confluence of several watersheds and is a benchmark for measuring coarse sediment flow. The ecological reserve is located on a small island formed by a loop of the Nimpkish River and a smaller channel that has cut off the loop. Many similar alluvial sites have been harvested and no longer support large and tall Douglas-fir forests. At this site the forest is primarily composed of Douglas-fir and western redcedar – fir dominates in terms of volume but the number of stems of western redcedar is slightly higher. The herb and moss layers are very diverse and contain many species indicative of excellent growing sites.
Secondary Role: The secondary role of this ecological reserve is to protect rare and endangered species. The old growth forest contains an active nesting site and serves as excellent foraging habitat for a red-listed subspecies of northern goshawk and for common ravens. Roosevelt elk, black bear, deer, beaver, and bald eagles are occasional visitors to the island forest.