Physical: The reserve encompasses the northern flank of Big White Mountain in the Beaverdell Range. Except for ridges at its peak, the mountain has a rounded summit. The reserve rises gradually from the 1860 m contour which marks its west, north, and east boundary, to the mountain peak (2315 m) in its south- central area. Soils of various types occur, but are mostly thin and interrupted by frequent bedrock outcrops near the peak. Deep snow cover is present for much of the year. 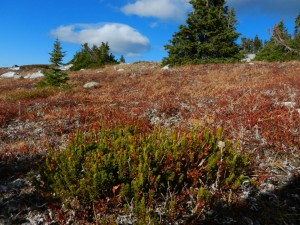 vegetation on the crest of the reserve. G.Fletcher photo

Biological: Typical stands of Engelmann spruce and subalpine fir occur in the lowest elevation northern parts of the reserve and small areas of treeless alpine habitat surround the peak. The bulk of its area supports an interesting transition between those types. With increasing elevation the spruce-fir stands become moderately open, then develop a parkland appearance in which islands of relatively tall trees are separated by meadows, and finally give way to scattered, stunted patches known as krummholz. Some studies have indicated that trees are gradually invading the alpine area.

Plant communities have only been described in a small part of the reserve above the 2164 m level, where 14 types were noted. These include krummholz communities dominated by either Engelmann spruce or subalpine fir, and tree islands in which these species reach tree stature and have an understory of grouseberry. Alpine communities dominated by common juniper, woolly pussytoes, sibbaldia, Parry’s rush, pink mountain-heather or a combination of those plants occur on dry sites. Moist to wet areas support communities characterized by showy sedge, black alpine sedge, Sitka valerian, paintbrush or mosses.

Climate Change: Due to warming temperatures, forest systems that are currently encroaching on the alpine ecosystem, partially due to human intervention in natural disturbance regimes, may continue to expand and invade the tundra. Changes in precipitation along with the increased temperatures may reduce the deep snow cover, exposing more land for colonization and further altering the drainage patterns and hydrology.

Forest health:  Fire suppression has resulted in forest in-growth, leading to loss of alpine ecosystem due to forest encroachment.

Urban and/or rural development  The area adjacent to the reserve is being developed by the ski hill, causing changes in water quality due to runoff and changed drainage patterns.

RESEARCH OPPORTUNITIES    A Ph.D. thesis on plant ecology is available