Orthocarpus bracteosus has been known in the Victoria area since 1893.    Historical records for Sidney, Oak Bay, Victoria and the Patricia Bay Highway are unmappable because the locality is too vague.    Historical records of populations at Rollin’s Farm, Blenkinsop (Lost) Lake, Mount Douglas (Cedar Hill) and Beacon Hill are at least 90 years old and no populations have been reported in recent years. They have probably been extirpated. The Elk Lake collection from 1933 may be from the same population as the 1954 collection from the Patricia Bay Highway but it has not been found recently despite detailed searches of the most suitable habitats by the senior author in 2000 and 2001.

all of Trial Island, 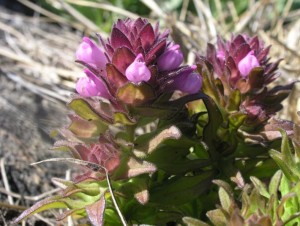 The author most recently confirmed this site in July 2001.
In conclusion, there has been a consistent downward trend in the number of locations consistent with the urban growth and development of suitable areas on the shore and offshore islets around Victoria. The total extent of the occurrence of rosy owl-clover in Canada has similarly declined and now consists of a patch of approximately 300 m2 on Trial Island.