During 2000, the warden made 13 visits to the reserve.  Most of these visits were for general survey purposes but other visits were for beach clean-up on Alpha and Griffin Islets, preliminary wildflower survey on Jemmy Jones Islet, Double-crested Cormorant nest count on Great Chain Island and broom removal on Griffin Islet.  On five occasions the warden spoke to people visiting the reserve; one family with a dog running over the top of Alpha Islet, two kayakers picnicking on Griffin Islet and, on three occasions, whale watching boats very close in at Great Chain Island.

The major management issue for the Oak Bay Islands Ecological Reserve appears to be visitation.  With 650 boats moored in the vicinity, at the Oak Bay Marina and the Royal Victoria Yacht Club, countless small boats launched at the Cattle Point boat ramp and other places in the area, there is the potential for a large number of people to visit these islands. 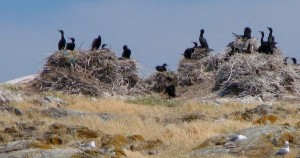 The Chain Islands area of the reserve has recently been designated as an “Important Bird Area” (IBA) by Bird Studies Canada. IBA’s document sites that are vital to the long-term conservation of the world’s birds. Since the mid 1980’s, in the Strait of Georgia, there has been a serious drop in the numbers of breeding Pelagic Cormorants (41% drop of active nests) and Double-crested Cormorants (81% drop of active nests) (Moul, 2000).  Nesting Glaucous-winged Gull populations have declined in this area by 34% since 1986 (Sullivan et al. 2001).  The reasons for the decline are not clear although depredation and disturbance by Bald Eagles appears to be a major contributing factor.  The islands are frequently visited by recreational boaters and eco-tourism companies whose boats approach close to shore.  Some land on Great Chain Island, disturbing the nesting birds. The IBA coordintor is working on a Conservation Management Plan in conjunction with B.C. Parks to establish guidelines for boats in the vicinity of the Chain Islets.

Signage is a good way to let people know that they are, in fact, on an Ecological Reserve. A review of signage wording and placement should be done.  Slide presentations to various user groups (i.e., sailing associations, kayaking clubs, eco-tourism companies) and articles in local magazines and newspapers would be beneficial in educating the public as to the sensitive nature of Ecological Reserves.

– The western end of Griffin Island had become inundated with broom, choking out the wildflowers the reserve was established here to protect.  Approx. 70% of the broom was removed from this site in November.  Weather hampered the completion of the removal.

– as is the nature of broom, it can come back with a vengeance, removal will continue.