ORIGINAL PURPOSE:  To provide sufficient high-quality marine habitat for a reintroduced
population of sea otters to increase their range and abundance to the point that they are no longer endangered.
CURRENT PURPOSE
To protect a representative marine ecosystem on the west coast of
Vancouver Island which provides habitat for a high diversity of species,
including the sea otter and northern sea lion.

The reserve is 30 km in east-west extent. Over 98% of its area is marine, the rest consisting of about 40 islands from under one hectare to 240 ha in size. The northern boundary includes 40 km of Vancouver Island shoreline which, except where protected by islands, is a rocky, high-energy environment. However, a few small estuaries and pocket beaches occur along the Brooks Peninsula shoreline. The largest islands are near shore. These have rocky, indented shorelines, but sheltered areas among them support soft bottom communities. Low cliffs, sea stacks, arches and caves are fairly common coastal features. Small islands and reefs occur offshore for six to eight kilometres and their outer tier, a chain parallel to the coastline, is aptly named the Barrier Islands. These receive the full brunt of Pacific surf. Between the major groups of reefs, and seaward from them, the Continental Shelf seafloor is quite smooth, with a gentle slope to the southwest. Inshore from the outermost reefs the water depth is generally under 45 m except for northeast-southwest troughs excavated by Pleistocene glaciers which flowed from three fjords located to the northwest. Seaward from the outermost reefs the ocean floor drops gradually to 90 m and then plunges abruptly to 450 m at the extreme southwest corner of the reserve.

The larger islands support forest cover dominated by Sitka spruce, including a spruce-western hemlock-salmonberry-sword fern association, and a spruce-salal- false lily-of-the-valley-moss association. Western redcedar and red alder occur.
Seabirds nest at three locations in the reserve (as reported in the 1993 Ecological Reserve Guide): 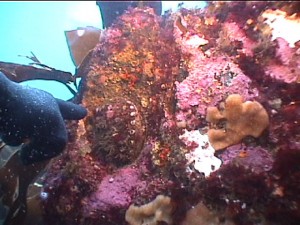 Thomas Island and nearby reefs; the outer Bunsby-Clara area; and o’Leary-Cuttle-Yule Islets. Estimated breeding pairs are 50 fork-tailed storm-petrels, 80 pelagic cormorants, 380 glaucous-winged gulls and 50 pigeon guillemots. Black oystercatchers breed on several reefs. Bald eagles nest at Bunsby and Thomas Islands, and probably elsewhere. A variety of land birds, including band-tailed pigeons and ruffed grouse, have been recorded on Bunsby Islands, and many feeding or transient seabirds on surrounding waters. Land mammals on one or more of the Bunsby Group are the dusky shrew, Townsend vole, deer mouse, red squirrel, raccoon, mink, black bear and black- tailed deer. None have evolved endemic forms. Western toads, clouded salamanders and northwestern garter snakes also occur.
Eighty-nine sea otters, previously extinct in Canadian waters, were introduced to Checleset Bay from Alaska over the period 1969-1972. By 1984 these had increased to at least 345 animals of which about 200 were within the reserve. Sea otters in Checleset Bay are largely restricted to a 50 km2 area directly offshore from the Bunsby Islands, including the Barrier Islands from Clara to Farout. Here they feed extensively on clams, abalone, and sea urchins. At sea otter feeding sites, the giant red sea urchin, which limits the distribution of kelp by grazing, has been almost completely eliminated, allowing extensive growth of kelp to occur. At typical sea otter feeding sites, from shallows to ten metres in depth, the bull kelp Nereocystis luetkeana forms a dense surface canopy, the understory contains the kelps Pterygophora californica, Laminaria setchellii, Laminaria spp., or a mixture of these, and large amounts of algal drift and detritus are trapped in crevices. By contrast, reef habitats of similar depth but not yet inhabited by sea otters typically support giant red sea urchin densities up to five to ten per square metre, abalone stocks of one to ten per square metre, and little or no kelp in the sea urchin zone. Many other invertebrates are also more abundant in these areas denuded of kelp by sea urchins than at sea otter feeding sites. The present feeding range of Checleset Bay sea otters is identifiable by the near-absence of giant red sea urchins, however, clams and less preferred invertebrates are present, and a large part of the reserve is still available for population expansion.
Intertidal and subtidal reef habitats support an immense diversity and biomass of invertebrates and algae. Beneath the stands of kelp is a characteristic dense turf of bladed red algae, while cover on the rock surface often includes coralline algae, barnacles, bryozoans, hydroids, sponges, colonial ascidians, tunicates and sea anemones. Despite limited sampling in the reserve to date, forty-nine species of marine algae and 88 of marine invertebrates have been found. Adaptations to heavy surf, including strong attachment devices, heavy integument and clustering of individuals, are very evident here. Being large and containing a variety of marine habitats, the reserve is expected to contain a high proportion of fish species known to occur along the west coast of Vancouver Island.

SEE ALSO CULTURAL IN THE PDF