To provide a research area containing extensive bog and fen ecosystems representative of outer islands along the northern mainland coast. 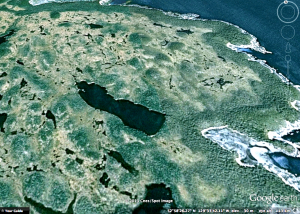 bogs on the southeast corner of the island.

Physical:  Most of the reserve is made up by low-lying Dewdney Island, the southernmost of the Estevan Group, which at low tide is connected to Barnard Island on the north. Many small islands, islets and reefs occur around its perimeter, including the Glide Islands 4 km to the east and totalling about 10 ha. The indented Dewdney Island shoreline, over 60 km in length, ranges from rocky headlands and coves to boulder, sand, and shingle beaches and muddy lagoons.

Most of the island has bedrock-controlled, flat to undulating topography that does not exceed 50 m in elevation, however, a few bedrock knobs on the western part of the island reach 100-130 m. Regional bedrock consists of a variety of intrusive rocks. Despite extensive glaciation, unconsolidated surficial materials are almost absent and soils are largely organic types formed by decaying plant material on the bedrock surface. Sands and gravels occur near the shoreline.

Many bog ponds, sloughs, and small lakes are scattered over Dewdney Island in flat areas and depressions, however, drainage patterns are poorly organized and permanent stream courses few and small. The maritime climate is characterized by frequent cloud cover, mist and fog, and by minimal seasonal variations in temperature.

Dewdney Island is characterized by an outer rim of forest and interior area of wetland, the latter making up 60 to 75% of the total land area. Extensive occurrence of fen, bog and scrub vegetation, which occurs on both flat and gently sloping surfaces, is attributable to the subdued topography, moist climate, and lack of surficial materials conducive to development of forest soils. Forests are restricted to steep, well drained slopes and to a fringe near the shoreline where sands and gravels overlie the bedrock and nutrient supplies are better. Most of the forest cover consists of medium to small-diameter trees estimated at 80 to 100 years of age, evidently originating after a forest fire. Smaller remnants of much older trees are scattered, often on points and peninsulas.

On Dewdney Island, treeless fens dominated by tufted deer-grass and sweet gale are the wetland type of greatest areal extent. A less extensive fen community growing in standing water and dominated by Sitka sedge and sweet gale, contains few other plants. Throughout the fens, muddy depressions a few metres across alternate with the raised, vegetated areas. The sparse plant cover in these depressions is characterized by beak-rush, a few other herbs, mosses, and the lichen Siphula ceratites. Two kinds of bogs have been identified. The first dominated by sphagnum mosses contains a few scattered shore pines, western redcedars, and yellow cedars of shrub stature; the second type is dominated by shore pines which typically cover one-third to one-half of the bog and reach three to six metres in height. Shore pine scrub forest is also present.

Trees recorded in the reserve include western redcedar, western hemlock, Sitka spruce, yellow cedar, lodgepole (shore) pine and western yew. To date 186 species of vascular plants, 31 mosses, 14 liverworts and ten lichens have been identified in the reserve. Many of these are wetland species, ranking these fens and bogs among the most diverse of their type. Many plants here are restricted to bogs of the outer coast.

Typical of such isolated islands, the mammal fauna is sparse. However, black- tailed deer, wolves, beaver, river otters, mink, deer mice and dusky shrews have managed to invade since the melting of Pleistocene glaciers. Beaver are instrumental in maintaining some of the wetlands. The avifauna is more diverse, though not thoroughly surveyed. Noteworthy nesting species are the Canada goose, sandhill crane and Lincoln’s sparrow. Only a few nesting sites of the sandhill crane are known in British Columbia. Other birds noted in the reserve include the common and red-throated loon, red-breasted merganser, great blue heron, blue grouse, band-tailed pigeon, bald eagle, Cooper’s hawk, goshawk, sanderling, dunlin, raven, winter wren, hermit thrush, American robin and junco. A colony of the burrow-nesting Cassin’s auklet is present on Glide Islands.

Climate Change: Climate change research conducted by the IPCC has projected increases in temperature and changes in hydrology for the
coasts of North America. The implications of these changes are difficult to predict as they will vary from site to site, but the scientific models upon which published assumptions are based suggest the possible drying of wetland areas due to changes in precipitation forms and patterns. Wetland areas may be subject to flooding in winter and spring months followed by drought in summer and fall. Should this be the case with the Dewdney and Glide Islands, the increased variability will directly impact the extensive bog and fen ecosystems for which the reserve is designated.

Recreation: Anchoring and picnicking on the island beaches disrupts marine and terrestrial wildlife.