To retain representative subalpine parkland in a transition area between
dry and wet interior climates.

Physical: The reserve is situated on the rolling crest of the Hunters Range. This range, within the Shuswap Highland, is bounded on the north by Eagle River, east by Wap Creek and Mabel Lake, and south and west by Shuswap River. Except for a sharp ridge in its extreme southwest corner, the western half of the reserve consists of rolling terrain between the 1675 and 2000 m elevations. Kingfisher Creek valley, trending north to south, occupies most of the eastern half of the reserve. The steepest slopes in the reserve are along this valley. Kingfisher Creek empties into Shuswap River.

See the complete BC Parks PDF:kingfisher 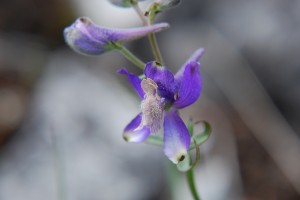 Biological:The major feature of interest in this reserve is an extensive area of subalpine parkland typical of the uppermost subzone of the Engelmann Spruce-Subalpine Fir Zone. This is best represented above the 1700 m elevation where it becomes open forest and the trees become increasingly stunted into windblown krummholz islands as one approaches the maximum reserve elevation of 2135 m. Meadows between the tree clumps contain many alpine plants but there are no sizeable

areas of completely treeless alpine tundra. Subalpine fir is the most common tree in the parkland area. Subalpine meadow communities are dominated by such species as pink, yellow and white mountain-heathers, wooly pussytoes, partridgefoot, western pasqueflower, Brewer’s and five-stamened mitreworts, and black alpine sedge. Showy wildflowers in this area include Indian paintbrush, arnicas, glacier lilies, and larkspurs.
Typical Engelmann spruce-Subalpine fir stands, with shrubs such as white
rhododendron and black huckleberry in the understory, cover most lower elevations in the reserve except for a few rock outcrops and talus slopes. A finger of Interior Cedar-Hemlock forest barely enters the reserve in Kingfisher Creek valley, below the 1370 m elevation.
The fauna has not been surveyed, although Ruby-crowned Kinglets, American Pipit, and Dark-eyed Juncos have been noted.