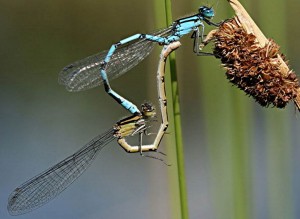 Image of   Enallagma cyathigerum, one of the species on the list below, by L. B. Tettenborn

No work involving heavy equipment was carried out by West Kootenay Power along its transmission line in 1999 so road condition remained unchanged except for one steep section that continues to deteriorate. If it ever becomes impossible to return up it to the south end, then exit will have to be north through Kalamalka Lake park which makes the status of the gates on private property in that direction critical.

The approval process for development of land south of the reserve by Terra West Investments appears to be in abeyance. A total of 1400 homes are envisaged for the area between the reserve and the presently locked gate on Sawmill Road.

Final steps to completion of this process are expected in the first half of 2000 starting with public open house review before spring.

A total of 31 hours is estimated as having been spent on warden activities including 10 hours at home on report preparation and specimen identification. Milage amounted to

A wetland grass, Weak False-manna or Weak Alkaligrass (Torryochloa pauciflora), was collected in flower on 6th August at the edge of Lake 1 and might be expected at other lakes. It should be added to the updated list of 1998.

The voucher collection of 200 named specimens from this reserve was delivered to Royal BC Museum in July.

Count variability due to environmental conditions makes comparison with other periods difficult; probably the most that can be expected from a monitoring program is the observation of trends over a period of years or sudden fluctuation caused by chance occurrences.

The highest count in 1999 (68) was less than the highest in the previous year (91), however the average of 6 counts (47) was higher than the 1998 figure of 34 from 8 counts because of two particularly low instances that year. In the circumstances it is reasonable to consider numbers from both years as being comparable

Salamanders of all types are secretive and rarely found casually. The opportune period is during the first warm period in spring when distribution for breeding occurs, notably on rainy days.

In order to test their presence in spring three 0.5² m boards were placed, slightly raised from the ground, in shady, moist locations on the east side between Lakes 10 and 11 late in 1998. When inspected in April 1999, one had been carried away by high water and the other two showed nothing beneath.

Later in the year on 6th August when patrolling the canyon floor north of Lake 1 two salamander larvae were noticed in a small (3½ x 2 m) shaded, seep-fed pool of about

25 cm maximum depth, in the damp Western Red-cedar/Skunk Cabbage area. These were not caught for observation as rubber boots, net and holding containers were not available. One of the larvae was roughly 50-60 mm long and the other 30-40 mm; no hind legs could be seen from the observation distance.

Tiger Salamander does not occur this far north nor in forested habitats. Long-toed Salamander, the common species, is usually related to wetlands in open, grassy or lightly treed areas, though it is also found in wet coastal forests, however, it is an early breeder so immatures in August would be highly unusual, although the canyon is a frost pocket that may retard the breeding cycle. When a sketch made at a distance of one to two metres from the underwater larvae was compared with guide book illustrations it appeared to be closer in appearance to Northwestern Salamander. This species does inhabit moist forests and immature young can be found well into summer or may even take more than one year to reach maturity. Distribution records do not show it as reaching as far east in the province as the Okanagan Valley.

As part of the dry, southern Interior, the Okanagan Valley is particularly rich in dragonflies and damselflies with almost three quarters of all the species present in BC having been reported there, some of which being restricted solely to the Okanagan-Shuswap area.

To acquire information on their presence in the reserve the intention was to collect mainly on the inner, isolated lakes which have undergone no disturbance and can be expected to produce results unaffected by outside influences. In practice the difficulty of access carrying a long-handled net and deploying it on steep vegetated slopes against a fast and highly agile quarry immediately reduced the program to one of collecting only at the edge of the most southerly lake (#11). For this reason the following list is representative rather than comprehensive. It excludes a number of unidentified specimens and ones where identification was questionable. Specimens of Libullela were collected at the edge of the more open cattle pond just outside the reserve and were included on the probability that their range extends across the boundary on occasion.

Specimens comprising the following list were examined by Rob. Cannings (Royal British Columbia Museum) and corrections made where necessary. Thanks are given to him for generously undertaking this task. Dates on the table below provide a range for1998 and 1999 combined.

The following is a suggested draft Management Plan for Cougar Canyon Ecological Reserve for consideration at the next revision date.  [See separate article]