From the BC Parks Website.
ORIGINAL PURPOSE
To retain an accessible northern bog-forest complex for research and educational uses

Physical: This reserve is on
flanked by mountains rising to 1200 m or higher. Except for a hill on its western side, most of the reserve is flat and boggy. It is located at a divide between streams draining into Babine Lake and into the Bulkley River. Aerial photos show prominent north-south glacial striations on the valley floor. Soils are predominantly Organic types in which plant materials are poorly decomposed.

Biological: A mosaic of open bog, sparsely treed bog woodland, and dense forest is present. Three wetland communities have been described,. Open shrubby fens are dominated by grey-leaved and Barclay’s willows, mountain alder, cloudberry, and sphagnum moss. Sedge-dominated marsh and fen occur along the creek and pond margins. Cloudberry is particularly abundant in these sites. Forested bog communities include white and black spruce stands with ground cover dominated by Labrador tea and four species of moss, and a white and black spruce type containing subalpine fir, sweet colt’s-foot (var. palmatus), and mosses. On higher ground the tree cover is comprised of white and Engelmann spruce hybrids and subalpine fir, and the understory is characterized by dwarf blueberry, black huckleberry, and several mosses among which sphagnum is not included. This reserve appears to be rich in species of mosses. Other trees present are lodgepole pine, paper birch, and black cottonwood. A more extensive list of plants is available.

The fauna has not comprehensively been surveyed. Beaver dams are evident on air photos, and Moose are known to be common in the area. Tracks of Wolverine, American Marten, Short-tailed Weasel and Snowshoe Hare have been seen in the reserve. A brief list of birds and dragonflies is available. 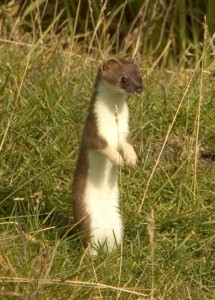