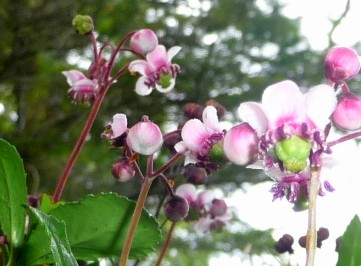 Chimaphila umbellata, pipsissiwa, included in the list below–
photo by Garry Fletcher

Two new metal gates have been placed across the West Kootenay Power road north of the reserve. These probably mark the points where the road intersects surveyed block #4678. Both were open when encountered but could be a restriction to access from the north in the future.

At the south end the owner has kept the gate strictly closed and prevents casual entry on foot.

An OCP amendment application has been made by Terra West Investments, the Calgary-based company which owns the land immediately adjoining to the south of the reserve. This area, which they are calling Kalamalka Plateau, is presently zoned for large lots. First and second reading of a bylaw must take place, then the proposed rezoning and development will have a public hearing. No date has yet been set.

It appears that the owner is requesting approval of the project as a concept because no definite plans or projections have yet been put forward apart from a general comment that “about one third of the total land space would be allocated to a golf course, another third to low density resort cells or villages, and the other third would be used as public natural open space”. By getting the OCP changed to allow a development of this type, the property would become more saleable as a whole or easier to interest a developer in undertaking. Lake Country office staff mentioned a number of enquiries about the area had been made that may have been on behalf of potential partners or buyers.

I have asked to be informed of the timing of any meetings and open houses but it will be difficult as an outsider to comment if no detailed plans are put forth at that stage. As a land owner in the adjoining Central Okanagan Rural District rather than in Lake Country, the Crown probably has limited power to intrude in an OCP amendment in that municipality.

Direction from Parks would be appreciated.

One of the original proposals put forward by the Protected Area Strategy team was a large unit called Kalamalka Lake Park Extension (map and description enclosed) taking in more or less the whole area south of the park from the lake to the upper visual boundary as seen from Highway 97. Subsequent negotiation has eliminated most of this block however there is still a possibility of lesser additions on the west and north boundaries of Cougar Canyon ER.

If the LRMP process results in no change to land status there may still be an effect through regulation of future forestry activities by Visual Quality requirements. These are most likely to cover the view-scape from Highway 97 but some effort is being made to use the old weather station site as the reference point. Either would include land from the east side of Kalamalka Lake to the ridge top (i.e. more or less the west boundary of the reserve), and the steep slope running up the hill east of the reserve east boundary. As such they would be a positive development.

No human activities occurred to affect the reserve in the period covered, however weather did have a noticeable effect. Having been extremely hot with little precipitation during the period of greatest heat, there was an extreme water level decline of an estimated one metre in Lake 11 (and presumably in other lakes too). Young Douglas-fir trees up to about 2½ m tall growing in exposed locations or on thin soil throughout the reserve lost all their needles and may be dead.

A total of 59 hours is estimated as having been spent on volunteer warden activities including 14 hours at home on specimen identification (dragonflies) and preparation of a vegetation report. Mileage amounted to 580 km.

The collection of 200 voucher specimens for deposit in a BC herbarium has been packaged and awaits means of delivery.

One new species was added to the reserve inventory list. This was a small number of Mountain ladyslipper orchid (Cypripedium montanum) – Yellow list- in woodland south of Lake 10.

A slight change was made to the protocol for counting turtle numbers on Lake 11. Instead of a count from a vantage point on the north-west side supplemented by additions at the two lake extremities, the system now involves walking and counting the full length of the lake along the cliffs and slope above. The difference should be minimal but more likely to give better coverage.

If salamanders are reported in the Interior it is usually in spring. None have ever been reported for Cougar Canyon so several trapboards were put in moist, shaded locations between Lakes 10 and 11 for checking in the spring.

No. 108 was compiled in 1983 based on 13 visits through the season of that year. Since that time a number of additions and deletions have been made to the inventory list of species encountered and several names changed to reflect taxonomic revisions by various botanical workers. To accommodate these alterations an up-dated list is given below. In three cases an alteration is deemed necessary but no specimen is now available and the taxon is therefore shown as “sp.”. Information on date of record and habitat type should be obtained from the 1983 list.

Following the inventory is an analysis of vegetation of this reserve.

This area of the North Okanagan Basin ecosection is mapped under the Biogeoclimatic Ecosystem Classification as falling in the Interior Douglas-fir very dry, hot sub-zone, Okanagan variant (IDF xh 1). At its highest along the east boundary the upper part of the reserve nears the slightly wetter and cooler Interior Douglas-fir moist, warm sub-zone

(IDF mw 1) and small sections of the canyon bottom at the north end have a resemblance with that category.

The inventory of higher plants as now comprised lists 336 species or sub-species in 74 families and 207 genera. Up-dated data for the whole province will await completion of the release of Illustrated Flora of British Columbia but for comparison purposes approximate figures would be in the order of 3,000 species and sub-species in 135 families and 750 genera.

Included in these figures are exotics introduced from elsewhere to the reserve totalling 52 species, compared with an approximate 575 for the province as a whole. Most are either at the south extremity of the reserve where cattle have access along both sides of Lake 11, or close to the West Kootenay Power transmission line right-of-way which follows the ridge top along the west boundary. From there and from pylon sites, some of which are within the reserve, weeds have expanded but only by short distances or where disturbance has taken place.

In allocating provenance to the 281 native species for which range is know (i.e. the total present of 336 less 52 exotics and 3 natives for which the correct taxonomic description is not available) the following categories have been used :

which have a range of western North America and east

The result of this analysis gives –

One of the unallocated species is an unidentified Grape fern (Botrychium sp.) with a very restricted range. When a determination has been made it will almost certainly be placed on either Red or Blue List of the Ministry of Environment, Lands and Parks. Two other Blue Listed plants in the reserve are the sedges Carex comosa and Carex feta.

In order to compare the structure of vegetation in relation to climate this system was produced some time ago and bases its divisions on the over-wintering habit of individual species according to where the perennation bud (i.e. the point from which the following season’s growth develops) is situated in relation to soil surface. Categories used are:

Of the plants listed for Cougar Canyon 58% are herbaceous perennials (H), 14% annuals (Th), 13% woody trees and shrubs (Ph), 9% perennials springing from below soil or water level (Cr) and 5% creeping or low shrubs (Ch).

Forest Cover     The first map has transposed information by species or combination of species from the most recent Forest Service cover map. It shows that practically all of the steep and exposed west side of the canyon facing south to south-east is covered by widely spaced Ponderosa pine (primarily) and Douglas-fir (secondarily) that would not be considered commercial from a forestry point of view. The east side slope with a west to north-west aspect is heavier in Douglas-fir. Deciduous trees occur mainly in the valley bottom – Paper birch at the south end and Aspen to the north as well as in gullies and a few damp sites on the ridge top. Forest Service coverage does not include Black cottonwood which is intermittent along some of the lakes, or Western red-cedar which is present at the north end of Lake 1 and more sparely at the ends of one or two other lakes.

Mapping by the Ministry of Forests indicates that over the greater part of the reserve trees are in the 141 to 250 age class. The agency recognizes only one older age class, that being 251 years and up, which for many species is regarded as old growth. The fact that tree height in the subject area falls into the three lowest classes, i.e. up to 28.4 m or 85 ft., shows that difficult growing conditions presented by steep slopes, rock outcrop, aridity and exposure have a pronounced effect considering the age of trees.

Tree age can also be used as an indicator of disturbance. Limited areas of a young class adjoining the east boundary outline routes of possible periodic destructive water run-off where Aspen, a short-lived tree, shows preference. On the west side between the reserve boundary and Kalamalka Lake one block aged 41 tp 60 years probably represents the focus of a fire about that long ago. As the full extent as remembered by observors at that time was larger than this one block it must have left sufficient veterans of the existing age class as not to require revision following the fire. There is no sign of its having reached into the present reserve except possibly on a very limited scale.

In its mapping the Forest Service indicates areas considered as presenting environmental constraints to forestry according to its own categories. These have not been transposed because a map rendition does not provide much insight, however it should be noted that  the steeply angled canyon walls are mostly qualified as being sensitive on account of fragile or unstable soil, with additional qualifications to reflect moderate wildlife and recreational values.

The location of Cougar Canyon Ecological Reserve is within the Interior Douglas-fir very hot, dry sub-zone (IDF xh 1) however its orientation exposes it more to drier and warmer south-west wind circulation in its southern half than in the north, to the point where greater enclosure and channelling of cold winter air at the north end makes certain small sections there best regarded as belonging to the Interior Douglas-fir moist, warm sub-zone (IDF mw 1). Western red-cedar and Lodgepole pine are indicative of that higher and cooler category and would not normally be expected to occur in the IDF xh 1. These small areas in the bottom of the canyon do not correspond exactly with vegetation composition of any of the site units described for the IDF mw 1 but are noted on the accompanying map to the nearest similar unit.

The BEC system was devised by workers associated with forestry so its emphasis as a result is mostly on treed environments. Wetlands and grasslands are not dealt with in as comprehensive manner. Rather than make an allocation to the wettest site units in the IDF xh 1 to which they do not make a good match, wet areas are shown on the BEC map according to the main components, i.e. cattail and sedge beds between or fringing the lakes; alder scrub mainly at Lakes 5 and 6, with red-osier dogwood and hawthorn on the west side of Lake 1; and Aspen/willow scrub in damp spots on the ridge top. The IDF mw 1 wet areas occur north and south of Lake 1.

The final map numbers the individual lakes from north to south and shows prominent cliff outcrop.