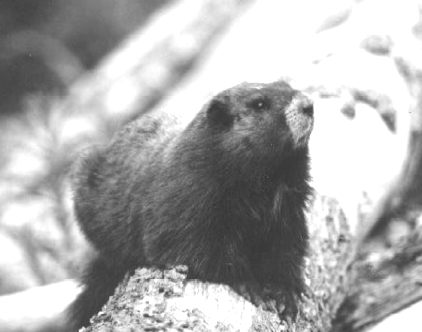 This is Occasional paper no.4 by Dave Nagorsin and Grant Keddie of the BC Museum, Victoria, and Tanya Luszcz, Biology Cooperative Ed Program U.Vic.

Abstract
Since 1985, faunal remains of the Vancouver Island marmot have been discovered in four high elevation cave sites: Clayoquot Plateau, Mariner Mountain, Limestone Mountain, and the Golden Hinde. Two sites are in Strathcona Provincial Park and a third is in Clayoquot Plateau Provincial Park. Cut marks on bones and artifacts recovered in Mariner Mountain cave indicate that the remains are the result of human hunting. Radiocarbon dating revealed that these sites are prehistoric ranging from 830-2630 years ago. The faunal remains provide additional evidence for a range decline in the Vancouver Island marmot. No marmots live in the vicinity of the cave sites today and three sites are peripheral to the present range. Although black bear, black-tailed deer, marten, and red squirrel are represented in the faunal remains, the predominance of Vancouver Island marmots suggests that aboriginal peoples travelled to these remote mountainous areas to hunt marmots. We summarize the analysis of faunal remains and review the implications for Vancouver Island marmot biogeography and conservation, and –aboriginal cultural history. Recommendations for future research in BC Parks and managing these cave sites are presented.