Breeding distribution, habitat selection and factors affecting coloniality in eared grebes in BC 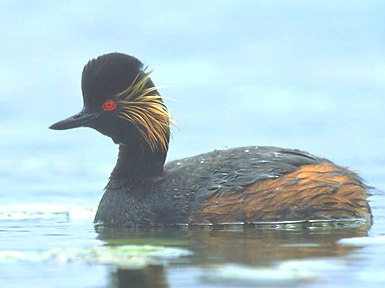 Abstract: In this study, I first describe distribution and abundance of breeding Eared Grebes {Podiceps nigricollis) in British Columbia. Second, I characterize and examine the relationships between nesting habitat and nest site selection on breeding group size. Finally, I. examine effects of colony size, nesting chronology and nesting synchrony on reproductive success at Eared Grebe colonies. I surveyed 421 wetlands in 1985 and 1986 and located 47 lakes used by nesting Eared Grebes. Those 47 lakes accomodated from a low estimate of 1761 to a high estimate of 4474 pairs. Breeding abundance, calculated from adult, nest and young counts, ranged from single pairs to more than 590 pairs per lake. Breeding took place in shallow lakes of various sizes, subject to extensive variations in water levels. Breeding abundance was positively correlated with lake area. Fewer breeding pairs utilized nesting areas close to shore (in shallower water) than nesting areas far from shore (in deeper waters). Nesting areas close to shore were found in smaller lakes and were used less often in consecutive years than nesting areas far from shore, presumably because of lower habitat predictability. An experiment with unattended artificial nests showed that nest predation was higher far from shore than close to shore. Nesting areas close to shore were used by small groups. These maximized concealment by being located in denser vegetation. Nesting areas far from shore were used by larger groups and were located in more open areas. On both years, adults arrived at nesting lakes in April and May, started laying on 27 May and departed from, nesting areas in late July and- early August. Nesting was significantly earlier and reproductive success per pair was significantly higher in 1985 than in 1986. A .stepwise multiple regression examined effects of colony-size, synchrony and chronology on nesting success. Only nesting chronology accounted for differences in nesting success. Late nesters were not birds attempting to renest. Instead, there appeared to be qualitative differences across colonies that were related to ages of breeders. Eared Grebe colonies are likely not formed from passive aggregation at limiting resources and there are likely no foraging benefits from colonial nesting. Nesting colonies could increase detection and mobbing of predators, but no evidence supported this. Anti-predator benefits of coloniality might have been masked by differences in breeding chronology and synchrony, or were missed because of low sample size. URI: http://hdl.handle.net/2429/28922 Series/Report no. UBC