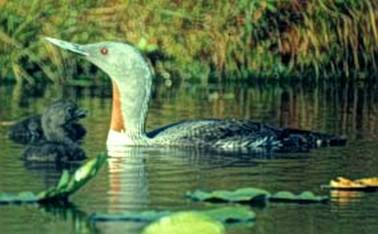 Reimchen, T. E. and Douglas, S. 1980. Observations of loons (Gavia immer and G. stellata) at a bog lake on the Queen Charlotte Islands. Canadian Field Naturalist 94: 398-404.
Abstract A small muskeg lake on the Queen Charlotte Islands was frequented in summer by up to 59 Common Loons (Gavia immer) and  19 Red-throated Loons (G. stellata), mostly non-breeding adults. The former occupied the deeper central areas and were most abundant near mid-day, while the latter preferred the shallows and were present from early evening until dawn. Although interactions between the two species were rare, Common Loons were dominant to Red-throated Loons except when the latter were close to shore. During peak abundance, Common Loons congregated in large groups; Red-throated Loons usually occurred in pairs. Common Loons used the lake primarily for foraging, with peak activity in mid-morning and at dusk; the dominant fish spcies present was Threespine Stickleback (Gasterosteus aculeatus). Red-throated Loons obtained much of their food during daily visits to the ocean and foraged only intermittently on the lake. Dive durations in shallow water were approximately 30 s for both species and, in open water, 40 s for Common Loons. (Full Text)

Reimchen, T. E. and Douglas, S. 1984. Feeding schedule and daily food consumption in Red throated Loons (Gavia stellata) over the prefledging period. Auk 101: 593-599.
Abstract    We describe parental feeding activities of Red-throated Loons (Gavia stellata ) throughout the prefledging period at two freshwater nesting territories in coastal British Columbia. The nesting lake contained resident fish populations, but adult loons fed marine fish to their young, making an average of 11 flights per day (average duration 60 min per flight) to the ocean and returning each time with a single fish. Small shallow-bodied fish (Ammodytidae, Pholidae), which were easily swallowed by chicks, predominated in the diet during the 3 days following hatching. The total weight of fish fed to the chicks per day (8— 194 g) increased over the prefledging period: adults returned fewer but larger fish (Embiotocidae) as the chick aged. Of the fish offered, 4% were too large for the chick to swallow.  (Full Text)

Douglas, S. D. and Reimchen, T. E. 1988. Habitat characteristics and population estimate of breeding Red throated Loons (Gavia stellata) on the Queen Charlotte Islands. Canadian Field Naturalist 102(4): 679-684.  Abstract    Of 184 lakes and ponds surveyed on the Queen Charlotte Islands. British Columbia. 18.5% had breeding Red-throated Loons (Gavia stellata). The number of loons nesting in different regions (lowland, plateau and ranges) was primarily a function of the number of lakes in the region and was unrelated to water chemistry, pH, conductivity, calcium, spectral characteristics), geography (size of pond, distance from ocean, elevation) or presence of resident fish. The population of breeding Red-throated Loons on the entire Queen Charlotte Islands was estimated by two methods at 784 or 892 pairs, with the majority nesting in the lowlands, a broad expanse of bog terrain.  (Full Text)

Abstract    Nine different calls were used by breeding and non breeding Red throated Loons on a lake in coastal British Columbia, Canada. All vocalizations were low frequency (<3 kHz) with multiple harmonics and many had a “noise” overlay. The calls can be classified as (1) territorial (Wail, Plesiosaur, Quack), (2) alarm (Wail, Kark) and (3) contact/feeding (Coo and Extended Coo, used by the male; Low Shrill and High Shrill, used by the female; Staccato, used by both sexes). Sexual dimorphism occurred in the Wail, with that of the female higher in frequency, and in the Plesiosaur call, with female and male calls markedly different in vocal structure. Visual displays that may influence the production of calls were associated with the Plesiosaur call and Wail; both of these calls and displays were usually performed in duet. The repetoire of calls in Red-throated Loons was greater than in Common Loons. This may reflect different methods of feeding the young: in Red-throated Loons, there is spatial separation of female and male during flights away from the breeding lake to obtain food while in Common Loons, which fish in the breeding lake, there is almost continuous pair contact.

This research was supported by the Ecological Reserves Unit, Ministry of Environment, Government of British Columbiaa, the Vancouver Public Aquarium, and NSERC grants to T.E. Reimchen.