Bog and Forest Ecosystems near Prince Rupert, BC

This reference is included since it de 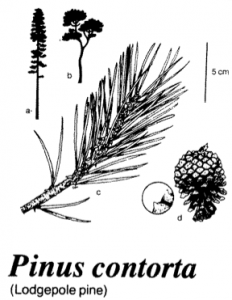 tails some of the unique characteristics of the blanket-bog ecosystem such as that which exists in the Dewdney Glide Ecological reserve.

A classification of the bog and forest ecosystems along four topographic transects near Prince Rupert, British Columbia is developed and described. The study area is classified within the Coastal – Cedars – Pine – Hemlock zone (CCPH) according to the British Columbia Ministry of Forest’s Biogeoclimatic classification system. Detailed vegetation, soil, site and mensuration data were collected from a total of 40 releves that were chosen according to the Braun – Blanquet approach of sampling distinct, homogeneous examples of climax vegetation. Vegetation data were analyzed using subjective tabular comparison, together with three objective ordination techniques; polar ordination, principal components analysis and reciprocal averaging. Tabular comparison and ordination proved to be complementary in developing and evaluating the classification, and in displaying relationships within and among the community types. It was recognized, however, that subjective rather than systematic sampling places limits on the interpretation of the ordinations. The vegetation, soils and landforms of six community types making up the blanket bog – upland forest complex of the study area are described in detail and vegetation – environment relationships are discussed. A cool, perhumid, rainy, hyperoceanic climate is considered the overriding factor influencing vegetation and soil development. Important associated controlling factors are; soil drainage, through its influence on soil water regimes and nutrient turnover; the two important soil forming processes of organic matter accumulation and podzolization; landform and topography, through their effect on soil drainage; and bedrock geology, through its effect on soil nutrient regimes and drainage. Vegetation – environment relationships on the north coastal mainland appear similar to those described in Southeast Alaska and on the southern and western Queen Charlotte Islands. There are, however, some significant floristic and geologic distinctions among these geographic areas. The oceanic blanket bog ecosystems of the north Pacific coast show many relationships with those in the western British Isles and, to a lesser extent, with those of eastern Newfoundland. The historical development of a bog woodland is reconstructed using pollen analysis, peat stratigraphy and C-14 dating. The succession spans 8700 +/- 210 years in the following sequence: Pinus contorta – Alnus rubra – ferns/ pioneer alluvial forest; Picea sitchensis – Alnus rubra -Tsuga heterophylla – (Thuja plicata) – Lysichiton americanum -ferns/moist productive alluvial forest on Regosols; Thuja plicata – Chamaecyparis nootkatensis – Tsuga heterophylla -Pinus contorta/scrub forest on peaty mineral soils; Pinus contorta – Chamaecyparis nootkatensis – ericaceous shrubs -Sphagnum spp. /bog woodland on organic soils. This ecosystem sequence is correlated with changes in paleoclimate reported for southwestern British Columbia, and may also be associated with edaphic factors such as changing drainage patterns, the formation of cemented soil horizons and the accumulation of thick organic surface horizons. The palynological, floristic and edaphic evidence for succession from forest to muskeg is contrasted with other edaphic evidence for succession from muskeg to forest in north coastal British Columbia and Southeast Alaska. I interpret the regional vegetation and soils as a dynamic complex of ecosystems linked successionally through a climatically sensitive pathway. Local site factors such as topography, landform, drainage and nutrient regime are important secondary factors controlling the direction of succession. The problem of defining the climatic climax vegetation along the north Pacific coast, where succession has proceeded in the absence of major disturbances such as fire for thousands of years, is addressed. I conclude that the scrub upland forests of Thuja plicata, Chamaecyparis nootkatensis and Tsuga heterophylla that predominate on the moderate slopes throughout the study area, appear to best express the macroclimate and should therefore be considered the climatic climax. However, this may not apply to the exposed outer coast where open blanket bog and bog woodland dominate the landscape, even on slopes.