Valerie M. Behan-Pelletier of Biosystematics Research Centre , Agriculture Canada, Ottawa did this research in the 1980s.

Oribatida are a quantitatively important component of most soils. They affect litter decomposition by feeding on and dispersing fungi, and by stimulating senescent fungal colonies through grazing.

It notes that two generas were found there which were not previously recorded in Canada. Exechocepheus and Passalozettes 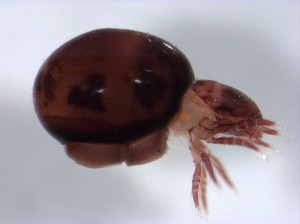